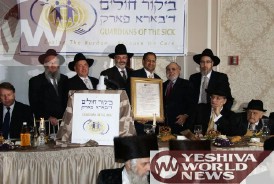 PHOTO & VIDEO LINK BELOW: It was much more than an outpouring of support for Bikur Cholim of Boro Park. It was more than simply having a distinguished roster of awardees. In reality, it was an affirmation of recognition from the community that it sees Bikur Cholim as a vital segment in the world of chesed. By the presence of so many choshuve Rabbonim, the community acknowledged Bikur Cholim as a place where help is offered in a דרך כבוד, with warmth and understanding.

Dinner Chairman Elly Kleinman explained the necessity of an organization such as Bikur Cholim and its impact on so many lives. He spoke about the Holocaust survivors that are helped, the teens at risk that are brought back to yiddishkeit, children from dysfunctional families that are given a chance, the sick and lonely that are visited and those who are helped with medical bills.

Mr. Kleinman then spoke reverently and presented a plaque to the family of Mr. Shlomo Zev Weiss z”l. It was truly a privilege for Bikur Cholim to have the Dinner dedicated in his beloved memory.

Dr. Miran Salgado and Dr. Martin Zonenshayn of NY Methodist Hospital Department of Neurosciences and Neurosurgery respectively, were honored with the Medical Appreciation Award for their contribution to the well-being of the Boro Park and Flatbush communities.

Mr. Reuven Lewkowicz, Board Member, was honored with the Shearis Hapleitah award for his monumental work helping Holocaust survivors navigate the complex reparation process, as well as the chesed he does with the needy.

Journal Chairmen Shea Fogel and Tzvi Goldstein, were presented with plaques by Sruly Herskovits, Executive Officer, expressing the gratitude of Bikur Cholim for their dedicated efforts on behalf of the B”H successful Journal Campaign.

Chaim Schoenblum, Executive Officer, spoke with emotion about Mr. Joe Ash z”l in whose memory the Dinner was dedicated. He then presented a plaque to the Ash family. It was a special moment that brought great honor both to Mr. Ash’s memory and to Bikur Cholim.

Rabbi Shmuel Steinharter, Executive Director, presented the Shalsheles Hachesed Award to Mr. & Mrs. Aron & Naomi Tessler, famous for their askanus and tzedakah extended to all those in need.

Chaim Schoenblum expresssed his hakoras hatov to Elly & Esty Berman, as they were presented with the Kesser Shem Tov Award for their generosity and tzedakah.

ר’ יוסף בן ר’ יעקב מנחם and we are grateful to the community for their outpouring of support and their affirmation of the good that Bikur Cholim does on a daily basis.

YWN VIDEO & PHOTO LINK: Click HERE for photos, and click HERE to watch a 7 minute video of a fascinating glimpse into real stories from their Family Crises Intervention Program and how Bikur Cholim turned things around—and makes a real difference in the lives of children. (This video was shown by their Dinner on Dec.5, and over 700 people were quiet while watching it!)