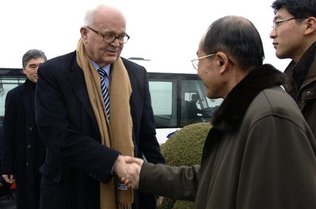 President Obama has written a personal letter to North Korean leader Kim Jong Il that was hand-delivered by the U.S. envoy to the country, theWashington Post reports. The contents — and until now, even the existence — of the letter were kept closely guarded by the administration, which requested that diplomatic partners refrain from discussing it publicly.

Stephen Bosworth, the U.S. envoy to North Korea, sidestepped questions about his mission last week, telling reporters that he himself was “the message,” sparking news in Asia that he was not carrying a letter.

Letters from U.S. presidents to the North Korean president are common — both Bill Clinton and George W. Bush sent them — but are usually sent as a last-ditch effort to preserve diplomatic relations. Obama is the first president to send one so early in his term.

The North Korean Central News Agency, the propaganda arm of Kim Jong Il’s regime, reported positively on Bosworth’s visit, saying that the government had narrowed its differences with the United States and reached several points of agreement. The U.S. is pressuring North Korea to return to “six-party talks” regarding its nuclear program.