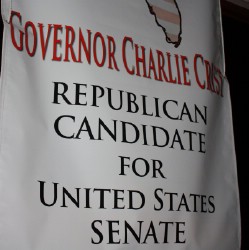 Florida Governor Crist said Tuesday that his office was the target of “almost an outcry” of nearly 50,000 e-mails, phone calls and letters from people urging him to spare Grossman’s life. “We’ve been swamped,” Crist said.

“I’m getting calls from people who are asking me to stay this execution,” Crist said, “and then once I inquired, ‘Do you know what the facts are?’ I find that they unfortunately do not . . . Sometimes the story can almost get ahead of the facts.”

Crist said he was standing on a Miami International Airport runway tarmac Tuesday afternoon when a close friend of his wife called his cell phone and asked him to halt the execution. Crist said she changed her mind after he described how the killing occurred. The woman, whom Crist declined to identify, said, according to the governor: “I’m glad you shared what the real facts are. I’m sorry to have taken your time.”

Crist said a group of rabbis and Harvard law professor Alan Dershowitz were among those urging the execution be stopped. “The sincerity of their message is without question,” Crist said. “I’ve reached the conclusion that justice must be done.”

In a speech to small business owners that was mostly about the state of Florida’s economy, Crist, a Republican candidate for U.S. Senate, went into great detail on the circumstances of the case, including describing the killer as “blowing her brains out.”

“Signing a death warrant is a responsibility that Governor Crist takes very seriously,” spokesman Sterling Ivey wrote in an e-mail to the St. Petersburg Times, “and the warrant for Martin Grossman was signed after a careful review …”