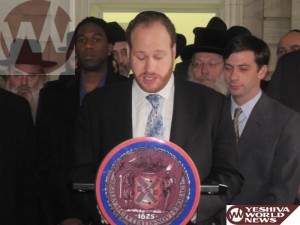 Priority 7 is a lifeline for thousands of this city’s neediest families, ensuring that over 2,200 children are provided safe, professional child care. The program is slated to end on December 31, 2010 and its elimination will not only leave thousands of families without a safety net, but will also likely lead to the closure of at least 7 day care centers that rely on Priority 7 vouchers for revenue.

“It is cold outside today, but not as cold as the Administration’s decision to terminate Priority 7 child care vouchers for the neediest families in New York,” said Councilman Greenfield. “Simply put, this decision discriminates against one population that is historically underserved by city-funded child care.”

In recent years, Priority 7, which primarily benefits Orthodox Jewish families, has become the default option for reducing the Administration for Children’s Services’ budget shortfall. But, while other programs are recommended for funding reductions, Priority 7 is consistently suggested for complete elimination at the expense of a single, exceptionally needy community.  In past years, the City has managed to grant the program a reprieve.  However, this year, it appears that Priority 7 may finally come to an end.

“Time and time again, we have come together to preserve Priority 7 child care vouchers for more than 2,200 children with nowhere else to turn. We cannot eliminate this critical child care support for families in need,” said New York City Public Advocate Bill de Blasio. “I call on the Administration to come back to the table to find a way of maintaining child care services for low-income families that desperately need them.”

Last week, at a rare personal meeting with Mayor Bloomberg, Council Members Greenfield, Fidler, James, Lander and Levin, known as the “Gang of Five,” hand-delivered over 15,500 letters from their constituents, in addition to over 12,000 letters that were delivered in June, pleading with the Mayor to save Priority 7.  During the meeting, the Council Members offered a compromise to phase out the program by cutting it 20% each year for the next five years, which would allow the community time to establish Priority 7 alternatives.  Mayor Bloomberg said that he would consider the compromise. However, in light of the $1.6 billion in current mid-year budget cuts and several billion dollars in planned cuts for next year, the mayor said that a funding restoration was unlikely.

“I don’t think that the Bloomberg Administration understands the severity of this cut to a single community,” explained Councilman Fidler.  “Even in hard times, we are expected to share the pain.  Priority 7 voucher cuts fall disproportionately on Brooklyn’s Orthodox community and will result in the shuttering of several of our community’s most venerable institutions.  It is imperative that this unfair cut be reversed.”

Priority 7 was designed to primarily benefit the Orthodox Jewish Community because, according to ACS, it is a historically underserved group with respect to government-funded day care.  However, unlike budget cuts that require all New Yorkers to share the pain, the elimination of Priority 7 places the burden of balancing this city’s budget squarely on the backs of a single needy community.

“Priority 7 vouchers benefit over 2,000 children across the city, and provide an economic lifeline to families with social service needs,” said Manhattan Borough President Scott M. Stringer in a statement. “We also know that the impact of eliminating these vouchers will fall disproportionately on the Orthodox community. That’s why I’m joining this coalition of elected officials and leaders of our religious communities to call on the Mayor to immediately restore these cuts, and put New York City children first.”

In June, the Gang of Five Council Members managed to extend funding for Priority 7 an additional six months.  In October, when the administration planned to end the program 5 weeks early, the Gang of Five once again ensured that the deal reached in June, to provide funding until the end of December, was honored.  The group also held the Administration to their promise to consider extending the funding through the end of the 2011 Fiscal Year.

“Over the past year, Council Members Greenfield, James, Fidler, Lander, Recchia and I have worked tirelessly to advocate for the preservation of Priority 7 vouchers,” noted Councilman Levin.  “The loss of Priority 7 vouchers would have a devastating effect on the communities we represent.  We made a highly persuasive case to the Mayor last week, detailing exactly how devastating the loss of the program would be.  All of us — the elected officials and the community — need to continue to collectively press the Administration to continue Priority 7 vouchers.”

Council Members Karen Koslowitz, Michael Nelson and Mathieu Eugene also sent messages of support to their Council colleagues and many of the Orthodox Community’s most prominent leaders who attended the press conference. Rabbi Chaim Dovid Zwiebel of Agudath Israel of America, Rabbi David Niederman of the UJO of Williamsburg, Rabbi and Dr. Marty Schloss of the Board of Jewish Education and Mr. Jeffrey Leb of the Sephardic Community Federation all joined administrators from over 50 Brooklyn yeshivas that will be deeply impacted by the loss of Priority 7.

This overwhelming show of unity across the Orthodox Community was intended to send a strong message to the Administration that the community will not let the program go without a fight. With just seventeen days left until Priority 7’s termination date, the situation grows more dire by the day. “Time is running out for Mayor Bloomberg to hear the community and save this vital program,” concluded Councilman Brad Lander.