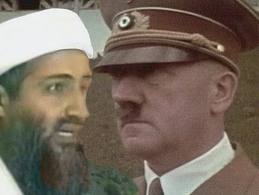 In an interesting twist, the deaths of both Osama Bin Laden, and Hitler were both announced on the same date.

On May 1, 1945, the death of Hitler Y”MS was announced by the BBC as follows: “Adolf Hitler has been killed at the Reich Chancery in Berlin, according to Hamburg radio.
At 2230 local time a newsreader announced that reports from the Fuhrer’s headquarters said Hitler had “fallen at his command post in the Reich Chancery fighting to the last breath against Bolshevism and for Germany”.

On May 1, 2011, the death of Osama Bin Laden was announced by President Obama: “Tonight, I can report to the American people and to the world that the United States has conducted an operation that killed Osama bin Laden, the leader of al Qaeda, and a terrorist who’s responsible for the murder of thousands of innocent men, women, and children.”