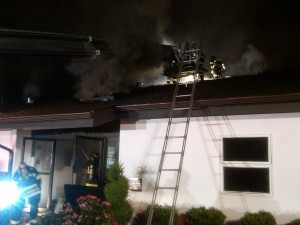 The company was dispatched at 1:11 a.m. to serve as a “rapid intervention team, a specialty rescue team to rescue down or disabled firefighter,” Wieczerzak said in an e-mail. When the fire company arrived at the scene, near Monmouth Road, firefighters went to work in the fire suppression effort. The company assisted Oakhurst Fire Company in cutting several ventilation holes in the roof to help locate and suppress the fire, according to the e-mail.

The blaze encompassed the entire structure and was contained by 3:40 a.m., according to Breaking News Network.

Other companies who responded to the scene were Wanamansa Fire Company and Unxcelled Fire Company of Neptune Township. All units had left the scene around 4:30 a.m., according to Wieczerzak.

Sources tell YWN that the fire was in the building attached to the main Shul, and is used by a children’s Minyan. There was no damage to any Sifrei Torah.