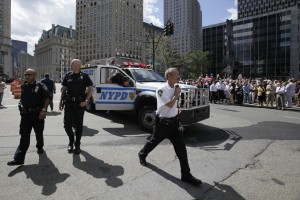 Tuesday’s earthquake rattled some New Yorkers enough to make them evacuate glass-encased office towers, and even the mayor and his staff fled City Hall.

But was that the right thing to do?

“If you think about it, the plate-glass windows above them have a potential for shattering,” he said. “That glass has to go somewhere. And it’ll hit people trying to come out of a building.”

What New Yorkers should do, he said, is drop under “anything sturdy” and “brace yourself until the shaking stops.”
At that point, it is fine to evacuate a tall building — which might have sustained structural damage and could be worsened by aftershocks. A building collapse, he said, is very unlikely.

“The reality of that happening is very low, but the reality of you getting hit by a big plate glass window that shattered and cuts you and makes you bleed to death is more likely.”

The protocol for “What to Do During an Earthquake” on the Web site for the Federal Emergency Management Agency cites the 1933 earthquake in Long Beach, Calif., where many of the 120 people who died were killed when debris fell on them as they fled from buildings.