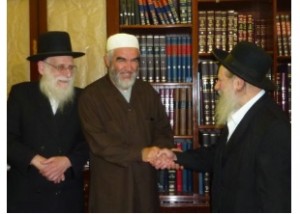 Sheikh Rayed Salach, a senior official in the Israel Islamic Association, one who is no stranger to the inside of an Israeli prison due to his efforts on behalf of Hamas, met in the UK with Rabbis affiliated with Neturei Karta. The meeting was held in the London home of a member of the local heimesh community.

Members of Neturei Karta recently took part in an al-Quds Day event in London alongside those seeking the destruction of the State of Israel. They carried Palestinian flags and joined in with chants calling for the “liberation” of Israel from Zionist hands.

They were interviewed by the local media, and they detailed how they are the true believers, those who follow the Commandments, pointing out that the ruling Zionist government in Israel in no way should be viewed as a legitimate representative of the Jewish People chas v’sholom.

They described the event from a slightly different perspective: “Once again the G-d fearing delegation was received with great honors by the participants in the protest, the non-Jews, and at the conclusion of the march, R’ Aaron HaCohen was called upon to address the crowd, permitting him to explain the chasm between Zionism and Yiddishkheit – explaining that which remains of this bitter exile if the four amos (cubits) of Halacha while the Zionists represent the occupation, which was accomplished by means of brutal terrorism R”L. They inaccurately portray the name of the Holy Jewish People by the deplorable actions, their wars, all which are prohibited according to the Holy Torah of Israel.

“The splendid sight, chareidi Yidden together with non-Jews, all expressing their sorrow and protest against the Zionists, an act that has a profound impact on the goyim, who appear to marvel the reality that there are Jews who are concerned for their well-being and who do not seek war and conflict, but only yearn to keep the Torah and its Commandments”.

Following participation in the al-Quds (Jerusalem) event the delegation met with Salach, and took advantage of the event to hold a major photo-op, resulting in the pictures of the Neturei Karta members and the sheikh being distributed around the world.