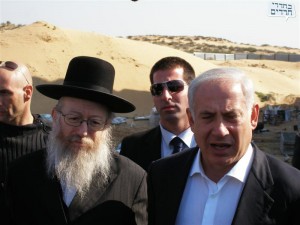 A ceremony was held in Assaf HaRofeh Hospital on Tuesday (August 30th) to dedicate the new MRI, not just a regular unit, but one that will eliminate the need for autopsies in Israel according to Deputy Health Minister Yaakov Litzman.

Many were jubilant over the dedication of the unit, including Yehuda Meshi-Zahav of Zaka, who was on hand along with the deputy minister; Deputy Finance Minister Rabbi Yitzchak Cohen; Avraham Michaeli of Shas; Nissan Slomiansky, the Vice President of Lander Institute; Rabbi Yaakov Rosa of Zaka; Professor Yehuda Hiss, Israel’s chief medical examiner; as well as officials of Assaf HaRofeh.

Litzman was forthcoming with words of gratitude, explaining that finally, an end to autopsies in Israel, enabling pathologists at the Abu Kabir Forensic Institute to use the MRI to determine cause of death rather than continue with the prohibited autopsies. A special word of thanks was mentioned for Zaka, which played a pivotal role towards assisting in bringing this vital piece of equipment into operation. Litzman added the chareidi community has been at the forefront to prevent as many autopsies in Eretz Yisrael as possible, waging and tenacious battle.

It has been 5.5 years since Zaka announced it was spearheading efforts to bring the MRI to bring an end to autopsies in Eretz HaKodesh, enabling the physicians to determine a cause of death without an invasive procedure.

It was most ironic to see Prof. Hiss among the participants, a man who has defied Torah as well as the wishes of many families. He exhibited a deaf ear to pleas of rabbonim and askanim in many cases, always the voice pushing for an autopsy.

Over the years, it has been learned that in many cases, autopsies were performed even after the families objected and police did not call for a mandatory autopsy. On one occasion, hundreds of containers of specimens were found in Hiss’ facility, containing body parts and organs which the doctor’s reports indicated were returned to the bodies prior to interment, but this was not the case.