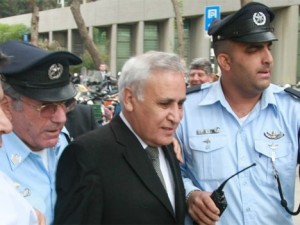 It appears that former President Moshe Katsav hasn’t come to terms with the reality that next month he is scheduled to enter prison, to begin serving his 7-year sentence following his conviction for violent crimes in March 2011 by the Tel Aviv District Court. The former president’s appeal to the High Court earlier this month was rejected, and he was given one month to get his affairs in order before reporting to prison

The former president’s attorneys on Thursday morning, 27 Cheshvan, turned to the High Court of Justice seeking to make an exception, to permit him to file an appeal within 45 days of his last hearing, when his appeal was rejected, instead of the standard 15-day filing period, to permit his legal team to prepare the case. The president is seeking another hearing before the nation’s highest court, before and expanded panel of justices in the hope of overturning the previous decision.

The president is currently set to turn himself over to officials in Matityahu Prison on December 7, 2011.