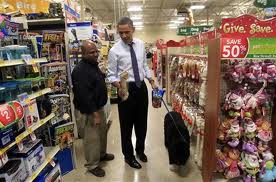 Bo Obama was supposed to be in Hawaii. Instead, he showed up at President Obama’s side Wednesday shopping for treats at Pet Smart

According to Michelle Obama’s press office, the first dog was planning to go to Hawaii with the first lady and the Obama daughters. The Chicago Sun-Times reported that he in fact had gone there. The Honolulu Star-Advertiser quoted an eyewitness who said he had seen the Portuguese Water Dog having his walk.

So what is Bo doing back in Washington shopping at PetSmart?

Either these reports are mistaken, or Bo was told his vacation was over and that he had to return to the White House to keep a lonely president company – and participate in a silly photo op presenting Obama as an average guy who likes to head out to the PetSmart.

If Bo returned from Hawaii, who paid for his flight?

It’s possible he hitched a ride on a return flight of the Air Force plane that brought Michelle from Hawaii, which wouldn’t have really added much to Michelle’s more than $100,000 price tag for her solo trip.

Or maybe he commandeered his own Air Force jet.