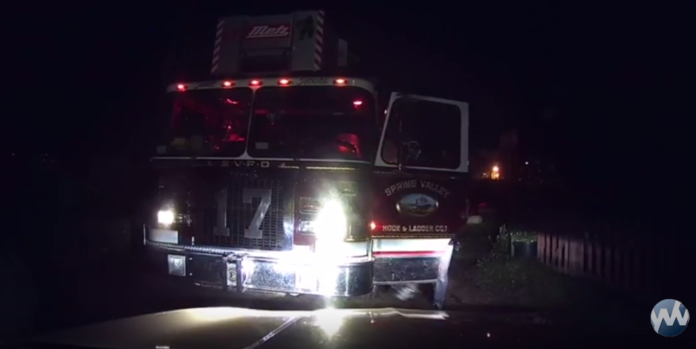 If anyone want’s to know why they hate Jews in Monsey / Ramapo, simply watch the video below.

The Spring Valley Fire Department responded to an emergency last night. When responding to the scene, they entered the one-way street the wrong way. When they finished the call, instead of backing out of the block, they simply continued on out – until the following occured.

A Frum person – who by the way released the video himself to the world – refused to move to the side or back out to allow the fire trucks to leave.

Whether they are right or wrong, there is something called RESPECT. Fire fighters put their lives in danger to save humans – all humans – no matter their race, religion etc.

Do you think in any other community or city in the United States anyone would have given the firefighters attitude like this? And a Jew with a Yarmulka has to do this? Does our community need more Chillul Hashem, like this one handed on a silver platter?

The haters and anti-Semites will hate Jews no matter what the story is. That is a fact of life that Jews have come to grips with over thousands of years. But the arrogance of this driver simply gives the haters more reason to hate.

When will we wake up and realize that this type of behavior is a powder keg that is near exploding?

We are our own worst enemy!

Please don’t tell me that he is just one bad apple. It’s true that he could be a bad apple, but he is a very bad apple that proudly sent his dash-cam video around social media, and the Spring Valley Fire Department is furious and insulted.

As usual, our self-appointed community leaders are asleep at the wheel, so I will do this for the masses.

The Spring Valley Fire Department – and all public servants need to know that the Orthodox Jewish Community appreciates their devotion and dedication to risking their lives to save others, and keeping us safe. We do not condone the arrogant behavior of this one individual, and condemn it in the strongest terms.