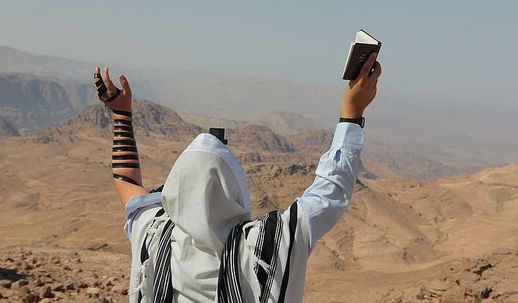 Rabbi Menashe Zelicha, the Rav of the Pardes Katz neighborhood in Bnei Brak, is currently in Jordan on the occasion of the Yahrzeit of Aharon HaKohen. The atmosphere however is very tense following the stabbing incident at the embassy and there have been several reports of harassment of Jews.

In a conversation with Tzvika Gronich on Kol Chai Radio, Rabbi Zelicha said: “Police came here after claiming that they killed two Jordanians at the embassy. The situation is tense. They do not let us daven at all.”

According to Rabbi Zelicha, the policemen told them that “in all of Jordan it is forbidden for Jews to daven.”

“We are not allowed to daven in the morning, even without tallis and tefillin, without anything – we must not daven, even in the hotel, even in the room.”

Zelicha goes on to say that “policemen came into the hotel and shouted and went wild and said that in a minute, they would take us out of Jordan if we made the smallest squeak and told us, ‘Whoever prays we will take him to jail.'”

“They brought policemen who have the authority to stop the person on the spot,” he says. “Those who see them davening will make an arrest.” Rabbi Zelicha noted that they discussed among themselves what to do with tefillas Shachris.

Rabbi Zelicha added that “when we arrived at the border crossing, everything was fine, everyone behaved politely, we passed all the checkpoints and everything went well, and suddenly, after they realized that we were a group from Jerusalem, we understood from the guides that the story of Har Habayis caused them to turn on us. They decided that they wanted to reexamine all the suitcases.

“After we went through an x-ray, everything was fine and then they made us pass through a second time. They began checking the suitcases and checking everything, refusing to transfer books, removing the prayer shawls, removing the tefillin. They took yarmulkes and people remained with only a shirt and trousers.”

“I and a few other individuals who saw what was happening,” he says, “managed to remove the tefillin from the side of the suitcase without them seeing.