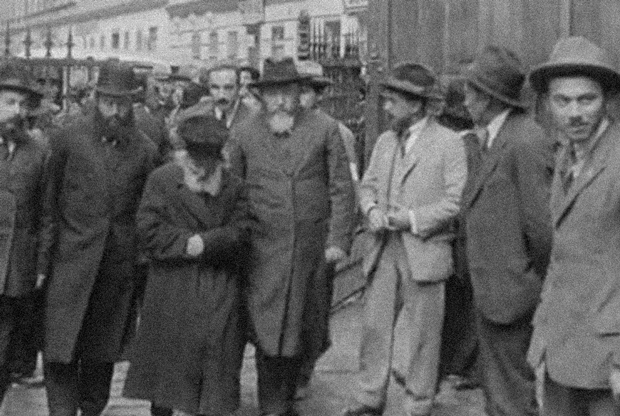 The following is a translation of an article found in the Journal “Bais Yaakov”[1], written by Rabbi Shmuel Pliskin[2], about the solar eclipse[3] which the Chofetz Chaim viewed.

It was a typical summer evening, a warm Tuesday, and the elderly Chofetz Chaim had just finished Aleinu. After placing his siddur down on the table, the Chofetz Chaim looked around, scanning the crowd which had packed the narrow room for maariv.[4] Finally, the Chofetz Chaim gave a klop on the edge of the table and began.

“Just as when a ruling governor sends a new minister to a city, the previous minister knows his days are numbered, so too when a child is born we are in essence being reminded that nobody is here forever. Death is not exclusive to those in a “membership club”. Everyone’s turn will come, no creation is immortal.”

The Chofetz Chaim continued “Hashem has implanted in his creation the phenomenon of a solar eclipse, as a means of refuting those misguided souls, who believe in other immortal powers. The time comes when the sun is eclipsed, so that we all know and internalize; the sun is a creation and not a creator! And us mankind…we’re no different.”

Once again the Chofetz Chaim tapped on the table and with an expression of triumph he smiled and added “let them all come and see!”

He continued, “It’s a mitzvah for us all to come and see…to see with our own eyes…it’s only a mortal chunk of creation.” The Chofetz Chaim tapped softly once again and smiled quietly.

The crowd slowly filtered out of the narrow room, deeply inhaling the cooler outdoor air, while chattering about the upcoming event, the rare solar eclipse early the next morning.

As lightning, the word spread throughout the entire village, in every house the news was relayed “the Chofetz Chaim has announced it’s a mitzvah to go and see the next morning’s sensation.”

The search began for broken shards of glass, usually a valueless commodity strewn about under ones feet, yet now a sought after material in light of the upcoming event. They set out industriously preparing their sophisticated equipment, blackening their glass shards with soot from a burning candle.

Morning came, seemingly another casual day, yet a sense of something different was in the air. The streets of Radin had never been as teeming at such an early hour[6]; men, women and children were all up and about.

And the sun…paraded along on its usual course, with confident strides, ascending with all its prowess, a blazing sun beating down, on the masses who had gathered, on the marketplace and on the green treetops swaying in the distance.

The small narrow room was also flooded with sunlight, spreading a golden glow, as a carpet to the feet of the Chofetz Chaim, who sat in his slippers at his table, arm wrapped in the straps of his Tefillin…the straps which tied his arm to his heart…and the heart to the mind. His fist waves in the air as his voice roars “יוצר אור וברא חושך…”.

The shadows, which roll around at the feet of the elderly sage, seem to be so peculiar now.

The sun’s brilliance, the blinding glow, has now been replaced by brilliant red, the redness now overpowering, as if its heart had been deeply plunged and wounded. The huge solar sphere… in midst of its youthful bloom has suddenly been cleaved. Fresh youthful life slowly being chiseled away. Not the groaning sound of a dying old man, it was the powerful gush of blood…draining from the wound inflicted by a cannon shell. Darkness…the animals in the field frightened, while the eyes of the townsfolk sparkled from content and satisfaction.

Here and there groups formed, on the porches and on the bridges, peering through their blackened glass at the waning sun, now half darkened. Near the Yeshiva building as well, stood groups of bochurim gazing upward. In the corner near the blossoming cherry tree[7], whose white flowers were turning a reddish hue, stood Reb Naftali the Rosh Hayeshiva of Radin[8], intensely peering through his glass shard, with eyes deeply sunk in their sockets. With a waved fist he explained to those around him, “M’darf nit kuken, m’darf zen!” (One should not simply look, one should see.)[9]

The Mashgiach[10] was also seen coming out from the Yeshiva building with rushed strides, quickly taking hold of a glass extended to him by one of the bochurim.

Off in the distance a large group formed around the aged Chofetz Chaim. He had davened earlier than usual on that day, and the members of his Minyan huddled around him anxiously anticipating…maybe they would be the one to merit having their glass used by the Chofetz Chaim. It was the black bearded Reb Yitzchok, energetic and calculated, the one who had left his parents as a young child,(leaving being his father who had been a Rov in Russia) and escaped the Soviet authorities, he was the one who was ready with a specially prepared perfectly shaped glass shard for the holy tzaddik to use.

The Chofetz Chaim gazed with awesome respect, the same way he quietly stared at his Chanukah candles, not turning his gaze as long as the light still flickered.

The courtyard of Yeshiva had turned into a veritable observatory; there was no peering through telescopes, but there was intense gazing through primitive blackened glass.

Darkness descended on the entire sphere, as if a huge inkwell had blotched out the entire sun. It was an eerie darkness, not the darkness of dusk nor the darkness of midnight. A black screen stretched across the entire sun… and then the marveling spectacle…the sun is born once again, just as it happened during the six days of creation. Not suddenly, rather a slow growth, as a child slowly developing, first a thin red sliver, slowly widening, the bright red color slowly overpowering the darkness. Once again red spills across the entire sphere, the redness of life, blood once again gushing through the arteries.

The cherry tree once again goes back to its light colored blossoms, in the fields morning is once again promising. The birds beat their wings in flight with greater assurance, though still tinged with a bit of doubt. And mankind…small creatures, blink their eyes, filled with satisfaction and contentment. The sun, once again in its full radiance, reclaims its prowess.

The elderly Chofetz Chaim sits and rests a bit on the chair which had been brought out for him near the door of his house, enveloped in silence. Slowly, step by step, the Chofetz Chaim makes his way back inside followed by his son-in-law Reb Mendel[11] and the  black bearded Reb Yitzchok, who’s carrying the chair back in. The pure and holy saint stops at the simple wooden table in the middle of the room and with an expression of victory emits a joyous call, “…just a mortal creation”.

[1]Vol. 40 published Elul 5722 (1962). I came across the article after seeing it referenced in the introduction to the Sefer Chidushei Grn”t.

[2] Rabbi Shmuel Pliskin was a Talmid of the Radin yeshiva from the year 1925 until 1937. He later was a Rov in Baltimore and was niftar in 1978. His son, Rabbi Zelig Pliskin Shlita, is a well-known author and educator.

[3] The article does not mention the date of the eclipse being related. After some research, it seems the eclipse referred to is the total solar eclipse on June 29, 1927. The article mentions it was during the later years of the Chofetz Chaim (who was niftar in the year 1933), yet Reb Naftali Trop (who was niftar in the year 1928) was the Rosh Hayeshiva at the time. This would imply that the eclipse took place in the mid-late 1920’s. The only eclipse during that time period which would fit the description would be the eclipse of June 29, 1927. This would also coincide with that which the article mentions that the eclipse occurred during the early morning hours on a Wednesday. However, the drawback with this assumption is that the article connotes that a total eclipse was visible in Radin. The eclipse of June 1927, although indeed being a total eclipse, totality was only viewable from regions further north than Radin, such as Norway, Finland, and far-north parts of the United Kingdom. Radin (54) would have only seen a 75% blockage of the sun.

[4] During his later years the Chofetz Chaim rarely left his house, and minyanim were held there.

[5] Koheles 7:2. The Chofetz Chaim seems to understand Beis Ha’mishteh to be referring to the celebration of the birth of a child.

[7] In March 2017, I had the opportunity to visit Radin and see the Yeshiva building which still stands today. I made a point to try and locate the cherry tree mentioned, but was not successful. (The tour was led by an amazing tour guide Reb Yehuda Geberer, who also provided some important comments for this article.)

[8] Reb Naftali Trop (1871-1928), served as the Rosh Hayeshiva in Radin from 1904 until his passing in 1928 at the young age of 57. Although the Chofetz Chaim, who was much older than Reb Naftali and recognized as the Gadol Hador, was actively involved in the establishment of the Yeshiva as well as in all the important decisions,he was not officially the Rosh Hayeshiva.

[9] Apparently what Reb Naftali meant was to not simply look, but to internalize the lesson.

[10] Seemingly this would refer to Reb Leizer Kaplan (son-in-law of Reb Hersh Levinson, who was actively involved in the Yeshiva along with his father-in-law the Chofetz Chaim, and brother of Reb Yisroel Chaim Kaplan) who served as the mashgiach at that time. (The famed Mashgiach Reb Yerucham Levovitz also served as the mashgiach in Radin for a short period before becoming the mashgiach in Mir, but clearly he is not the one mentioned here, since he had already left long before this time period.) 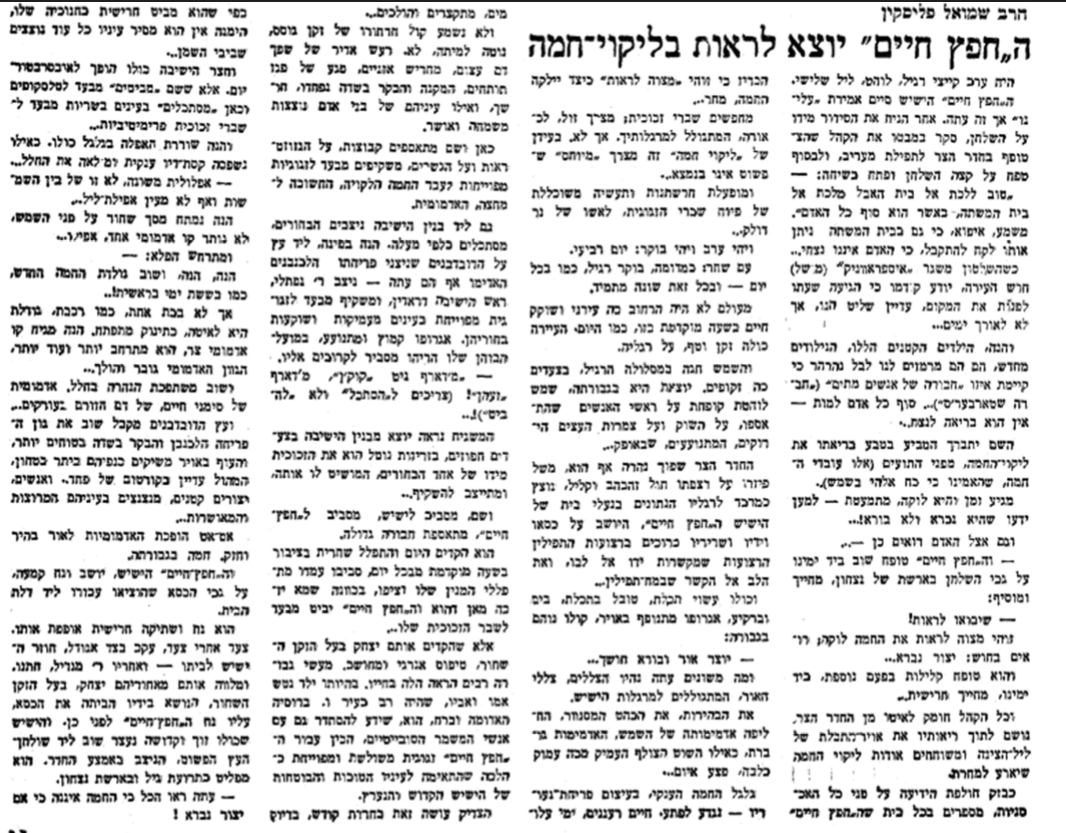