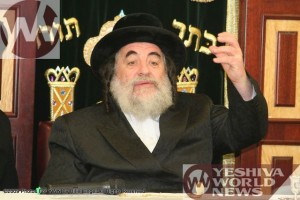 The Vishnitzer Rebbe Shita on Tuesday, 10 5772, visited Massiyahu Prison in Ramle. This is after the rebbe was in Kever Yosef during the night, accompanied by hundreds of chassidim.

The rebbe wanted to make a shiva visit to a son of the Shomrei Emunim Rebbe ZT”L who is serving a prison term in the Torah Wing of the prison.

Ahead of the shiva visit, the rebbe spoke in the prison’s shul. Former President Moshe Katsav, who is also serving a prison term, approached the rebbe and asked for a bracha. The two spoke for a period of time and Mr. Katsav mentioned in a passionate tone that he once met with the previous rebbe zt”l.

Also present was prisoner Ami Popper, who became a bal tshuva in prison. He had a yechidus with the rebbe for a few minutes and received a bracha as well.

The rebbe then proceeded to the shiva visit, the main reason for his visit to the prison.