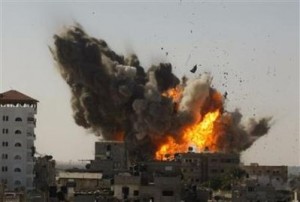 UPDATE 3:21PM IL: Rockets fired at Ashdod were intercepted by the Iron Dome.

UPDATE 3:15PM IL: Sirens sounding at this time in Beersheva.

UPDATE 3:14PM IL: Three IDF soldiers were injured moderately in a rocket attack in the Eshkol Regional Council earlier. They were transported to Soroka Medical Center in Beersheva and in surgery at this time.

UPDATE 3:09PM IL: The Be’er Tuvia home damaged earlier was hit by a shrapnel fragment of the Iron Dome intercept rocket which smashed into the living room of the home.

UPDATE 2:36PM IL: The IDF Homefront Command has prohibited all public gatherings in the 7-40km range from the Gaza border due to increased rocket fire.

UPDATE 2:26PM IL: Sirens sounding in Ashkelon and Kibbutz Zikim at this time.

UPDATE 2:22PM IL: Iron Dome downs 5 rockets heading to Ashdod/ The IAF is targeting terrorists in Gaza/ 12 IDF sorties in the past 10 minutes from northern to southern Gaza.

UPDATE 2:03PM IL: Sirens sounding in Ashdod and Ashkelon/ No injuries in the Beersheva rocket attack moments ago.

UPDATE 1:54PM IL: Sirens sounding in Beersheva and Ashkelon at this time.

UPDATE 1:40PM IL: IAF targeting terrorists in Gaza as the sirens sound in Tel Aviv. According to first reports, one fatality.

UPDATE 1:37PM IL: Two rockets fired at Tel Aviv from Gaza. According to Israel Police, the rockets landed in open areas. No injures/ As we post, another siren sounding in Tel Aviv.

UPDATE 12:09PM IL: Homes damaged in the last wave of rocket fire into the Eshkol and Shar HaNegev Regional Councils. No injuries being reported.

UPDATE 11:59AM IL: Three explosions heard in Sderot at this time as rockets impact. No immediate reports of injuries.

UPDATE 11:28AM IL: Sirens sounding in the Eshkol Regional Council/ 2 rockets fell near kibbutzim. No injuries.

UPDATE 11:18AM IL: Over 50 rockets fired into Israel this morning.

UPDATE 11:15AM IL: Rockets land in an open area in Ofakim. No injuries.

UPDATE 10:31AM IL: Rockets fired towards Ashdod intercepted by the Iron Dome.

UPDATE 10:22AM IL: A rocket slams down in an Ashkelon parking lot. No injuries being reported.

Hamas PM Haniyeh is holding a press conference following a meeting with the Egyptian prime minister who is visiting. Haniyeh calls on the international community to stop the Israeli bloodshed.

In addition, one may visit the multilingual Homefront Command website which includes information videos and a great deal of information.

UPDATE 9:33AM IL: Another round of rockets to Eshkol Region.

UPDATE 9:18AM IL: Despite calls for a three hour ceasefire, sirens are sounding at this time in Beersheva, Ashdod, and Gan Yavne. There are reports of explosions in Ashdod and Beersheva.

UPDATE 9:01AM IL: Egyptian Prime Minister Hisham Kandil and his delegation entering Gaza for their visit.

UPDATE 8:34AM IL: Jerusalem light rail service halted after a suspicious item was found on Herzl Street feared to be an explosive device.

UPDATE 8:25AM IL: The Iron Dome has intercepted at least five rockets fired at Ashkelon. Six rockets landed in the Eshkol Regional Council area. Another six landed in the Ashkelon beach area. Baruch Hashem, no injuries.

UPDATE 8:14AM IL: Prime Minister Binyamin Netanyahu has agreed to a three-hour cease fire to permit a visit to Egypt by high-ranking Egyptian officials.

UPDATE 7:51AM IL: The IDF is calling up 16,000 soldiers to active service as part of Operation Pillar of Defense.

UPDATE 7:50AM IL: The Iron Dome intercepted at least seven rockets that were heading to Ofakim and Beersheva.

UPDATE 7:42AM IL: Large wave of rockets heading to Beersheva and Ofakim.

UPDATE 7:36AM IL: IDF officials report that since the beginning of Operation Pillar of Defense, 420 rockets were fired at Israeli communities, of which 130 were intercepted by the Iron Dome.

UPDATE 7:13AM IL: Hysteria victims reported in Ashdod. Damage to vehicles in the parking lot. / In Shar HaNegev a rocket made a direct hit to a building resulting in a blaze. No injuries reported.

UPDATE 6:54AM IL: Rocket slams into a building parking lot in a residential area. There are no immediate reports of injuries. There are reports of power outages.

UPDATE 12:03AM IL: Thousands of police will be on hand in and around Jerusalem’s Old City on erev shabbos to maintain order. Special attention will also be paid to area including Akko and Jaffa as Israel Police works to prevent a terror attack and/or Arab unrests.

UPDATE 12:01AM IL: It appears the IAF struck a generator that supplies electricity for the Beit Haniyeh area of Gaza.

UPDATE 12:00AM IL: IAF strikes a building used by terrorist in Dir el-Balah in Central Gaza.

UPDATE 12:00AM IL: Gaza sources report the IAF is striking hard in many areas, including a targeted strike near the southern entrance of Beit Hanoun, in northern Gaza.

At least two people were eliminated and others injured. Rumors point to the elimination of yet another senior Hamas official.

UPDATE 12:00AM IL: Sources in Gaza now reporting 3 dead and close to 20 injured in IAF strike in the Beit Hanoun area.

UPDATE 12:00AM IL: All schools in the 40km (24 miles) range from the Gaza border will remain closed on erev shabbos. All residents in the 7km (4.2 mile) range from Gaza are instructed t remain at home.

UPDATE 12:00AM IL: Gaza sources report another IAF strike in Beit Lahiya. No additional information is available at this time.