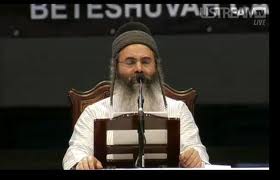 Speaking to Kol Chai Radio on Wednesday night, the eve of 29 Kislev, Rav Amnon Yitzchak, who heads the Power to Influence Party, stated he is not competing with Shas, “But Shas is competing with me and they are scared to death”. Rav Yitzchak explained “the people don’t want a traditional Sephardi party that addresses one shade of life, and this has Shas worried”.

He began the interview explaining that when Yair Lapid launched his Yesh Atid Party, he realized the dangers posed by Lapid and commissioned a poll that showed if he ran, a party under the name of Rav Amnon Yitzchak could earn 8-9 seats. Rav Amnon explains he then turned to HaGaon HaRav Aaron Leib Shteinman Shlita, and was told if this is the case, “it is a mitzvah to run”.

Rav Amnon angrily commented on the fact that a son of Maran HaGaon HaRav Ovadia Yosef Shlita came to his shul in Bnei Brak and bad-mouthed him, asking “Are they comparing me to Amsellem”, accusing Shas of “selling out religion and the torah”. R’ Yitzchak questioned the “chutzpa” of seeking to besmirch his name “a person that has done so much for Klal Yisrael.”

Speaking about Rav Moshe Yosef, and his wife Yehudit, who run Maran Ovadia’s home; Rav Amnon cited how he is not permitted to visit the gadol because it is not acceptable to “Moshe and Yehudit”. The rav spoke of threats against him, but preferred not to get into details.

Rav Amnon cites another incident in which Rav Ovadia was ill, and he arrived erev shabbos during the afternoon hours to give the rav a bracha. The door was opened by Rav Moshe. “I told him I wish to enter to give the rav a bracha. I saw the rav was awake. Rav Moshe responded ‘daven outside’. He did not permit me to enter. He later apologized but it’s simply nonsense. The way it works is that anyone who does not serve their agenda is out.”

The rav concluded by saying a recent poll shows 30% of Shas voters are moving to vote for his party. He added that the members of his lists are people who are not “politicians” people he selected personally, “people that know what it means to be active on behalf of the tzibur”.