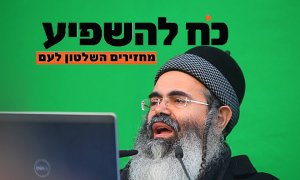 Rav Amnon Yitzchak arrived at the home of HaGaon HaRav Chaim Kanievsky Shlita on Monday, 11 Teves 5772. Rav Amnon visited the Gadol Hador in his home, seeking a bracha for election success for his Koach L’Hashpiah Party. Rav Amnon asked Rav Kanievsky to sign calling on people to vote for his party.

Rav Kanievsky greeted R’ Amnon Yitzchak with a warm handshake and then instructed him to visit HaGaon HaRav Aaron Leib Shteinman Shlita, referring to him as the “Manhig Hador”, Kikar Shabbat reports.

Kikar adds that officials in R’ Kanievsky’s home stress the rav’s home is open to all visitors all the time and Rav Amnon’s visit in no way should be interpreted as Rav Kanievsky’s support for the new party. When Rav Amnon left, he was given Rav Kanievsky’s bracha for ברכה והצלחה.

The statement from gabbaim of the rav add that one should remember than when election time rolls around, the rav is visited by many frum and traditional candidates seeking a bracha.