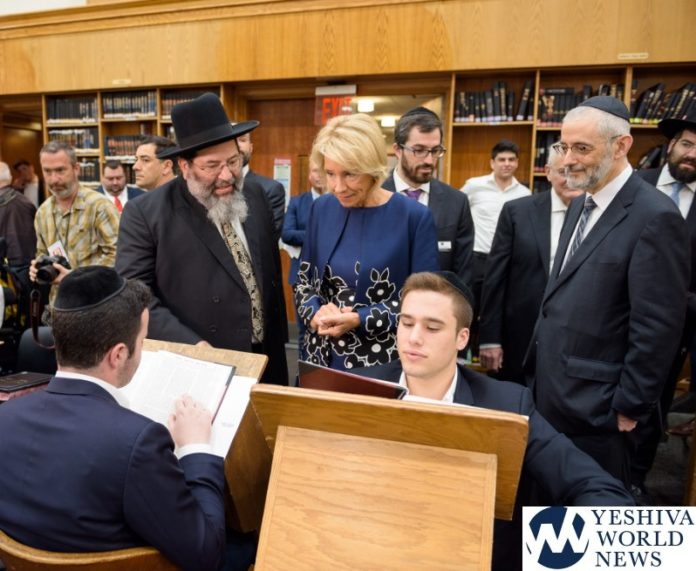 Yeshiva Darchei Torah was privileged to welcome the Honorable Betsy DeVos, the secretary of education of the United States, for a tour of its campus on Wednesday morning, May 16. Ms. DeVos made history as the first-ever head of the federal Department of Education to visit a yeshiva since the cabinet-level post was created in 1980.

The first stop was a third-grade classroom, where the rebbi was in the midst of a lesson on the shivas haminim. Using props from plastic fruit to freshly baked cookies, the rebbi ensured that the lesson came to life—and Secretary DeVos clearly enjoyed following along. She was shown the room’s SMART Board, one of many throughout the building, as an example of the Yeshiva’s successful integration of technology in the classroom. 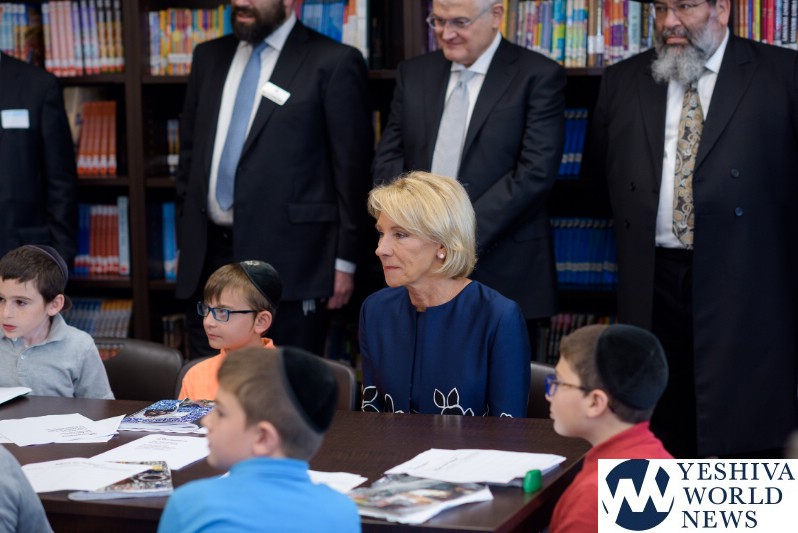 Further down the hallway, Ms. DeVos entered the Yeshiva’s Willens Literacy Library, where she sat down and joined the fourth grade boys in learning about poetry.

The Secretary’s next stop was to one of the crown jewels of Yeshiva Darchei Torah, the Rabenstein Learning Center, where she witnessed some of the 300 students with special-education needs who regularly receive tutoring, therapy and self-contained classroom instruction within the school setting.

After stopping in on a sixth grade class that was studying Gemara, the tour moved across the campus to the Weiss Vocational Center, a trailblazing program where a select cadre of Mesivta students spend part of their afternoons learning trades such as carpentry, plumbing, electrical contracting and home wiring—in addition to a core curriculum that includes math, sciences and language arts. The Secretary was shown a fully-functioning bathroom built from top-to-bottom by the students and watched as a talmid soldered an iron pipe. Another talmid presented her with a gift: a skillfully hand-crafted wooden cutting board with an American flag motif. 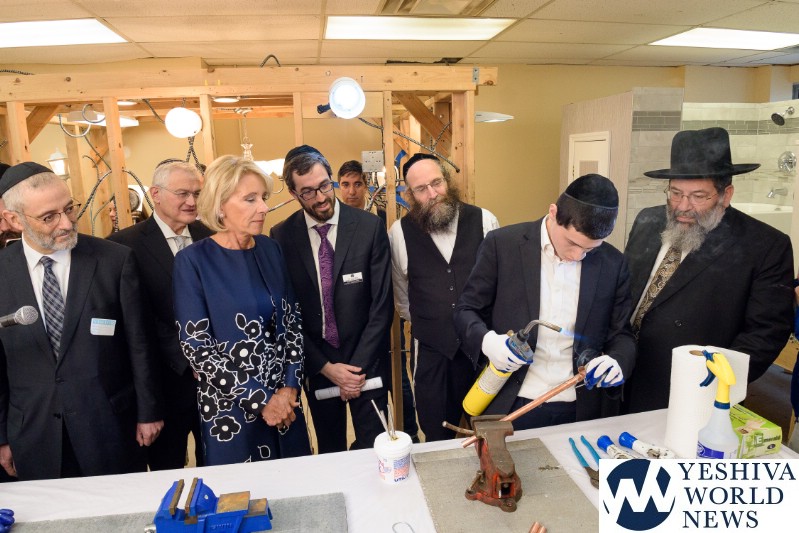 Arriving at the Yeshiva’s 5,000-square-foot bais hamedrash during first seder was visibly an eye-opener for the secretary, as the hall reverberated with the sounds of hundreds of bachurim and yungeleit learning together at wooden shtenders. She approached one pair, who happily explained to her the basics of studying Gemara with Rishonim and Acharonim and the efficacy of chavrusa learning. The visitors were also introduced to bachurim with physical disabilities who, in classic Darchei fashion, are integrated within the regular Yeshiva framework. 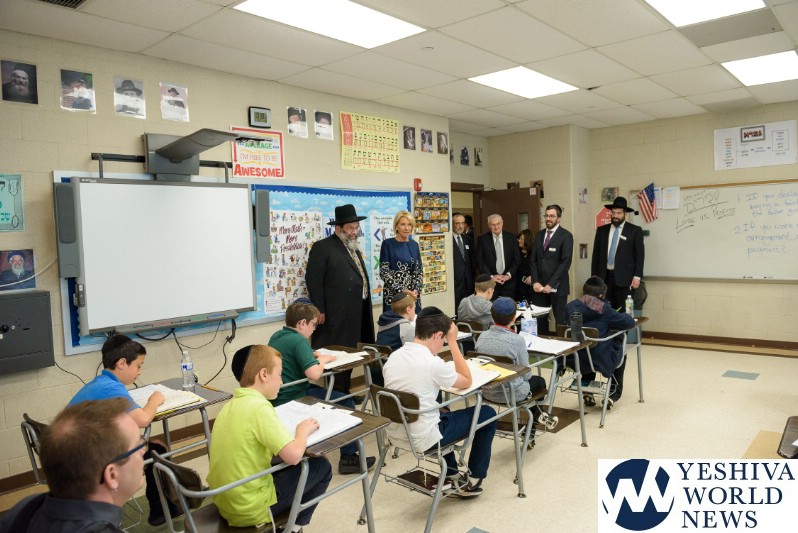 The delegation then walked across the campus promenade, passing the Yeshiva’s spacious ballfields and magnificent playgrounds, for a brief visit to a room full of precocious children in the Harriet Keilson Early Childhood Center.

The tour was followed by a luncheon meeting with a cross-section of Yeshiva Darchei Torah parents, teachers, alumni and board members, who shared their personal reflections with Secretary DeVos. Among the issues discussed were the success of the Darchei educational model, including the dual curriculum of limudei kodesh and limudei chol; the challenge of tuition affordability; and the need to ensure that programs for children with special needs receive their fair share of government funding. Secretary DeVos listened attentively and offered her own perspective on the need for continued advocacy on behalf of school choice, on both the federal and state levels.

The Secretary of Education was visibly moved by her visit to the Yeshiva. “I thoroughly enjoyed my visit with the young men of Yeshiva Darchei Torah,” she remarked. “The teachers and entire faculty are preparing them to build successful and well-rounded futures for themselves.” 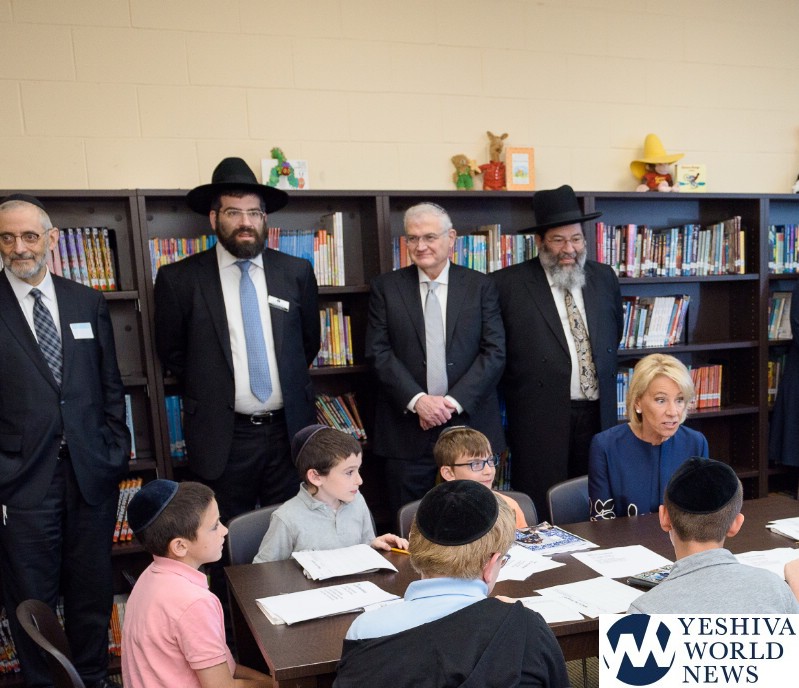 The visit was widely covered in the mainstream press, which tended to focus on the fact that Ms. DeVos visited only religious schools during this swing through New York.

Her spokeswoman responded that in New York and across the country, “religious education plays an important role in the education landscape. Every child and family has unique education needs, and for some, that means not having to bifurcate religion from education.” The spokeswoman added that the two-day visit to New York yeshiva institutions “gave the secretary an opportunity to see firsthand how that’s working for Orthodox families.” 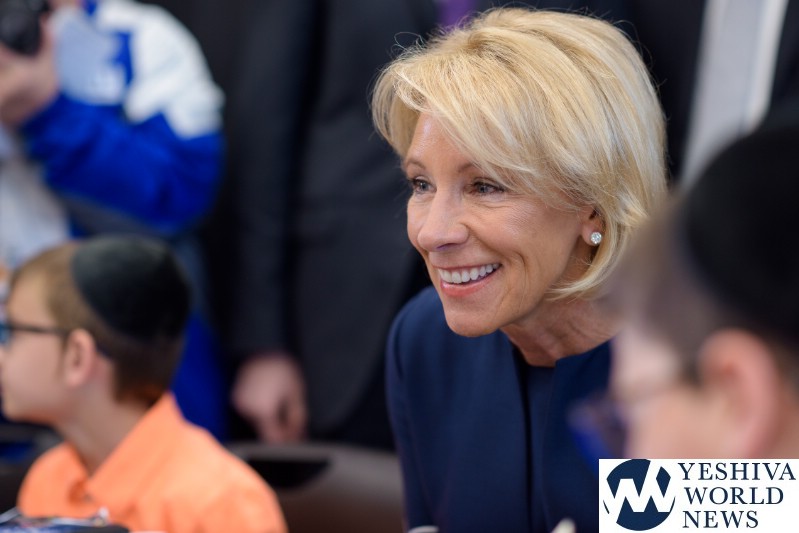 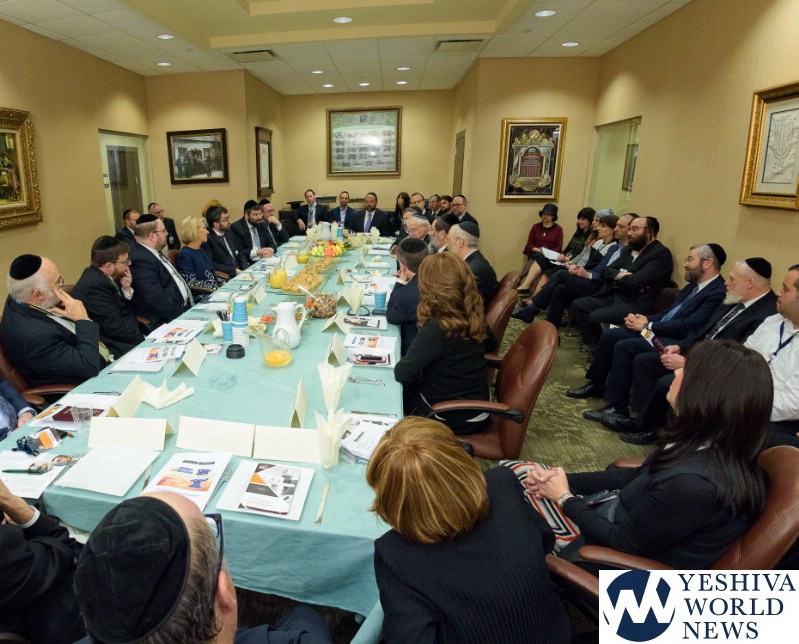 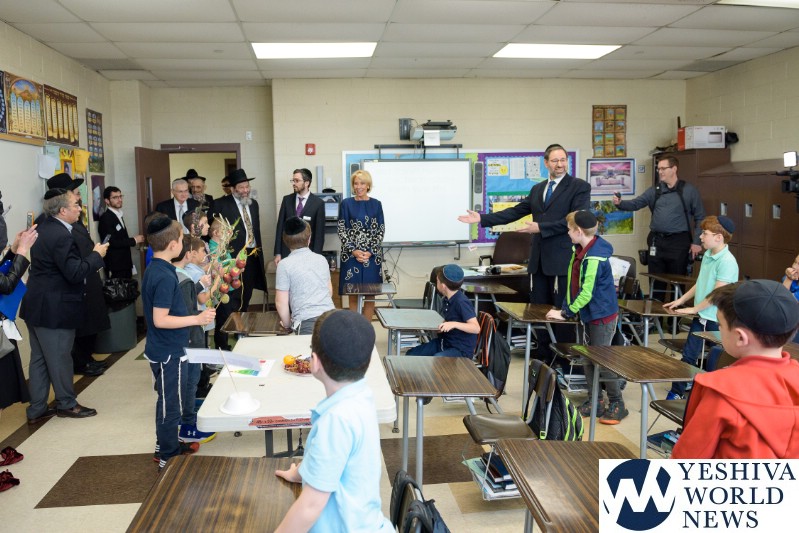 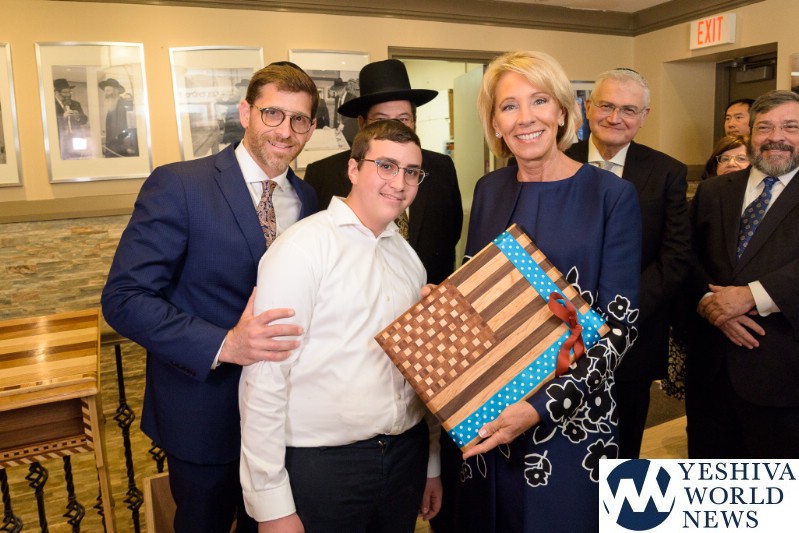 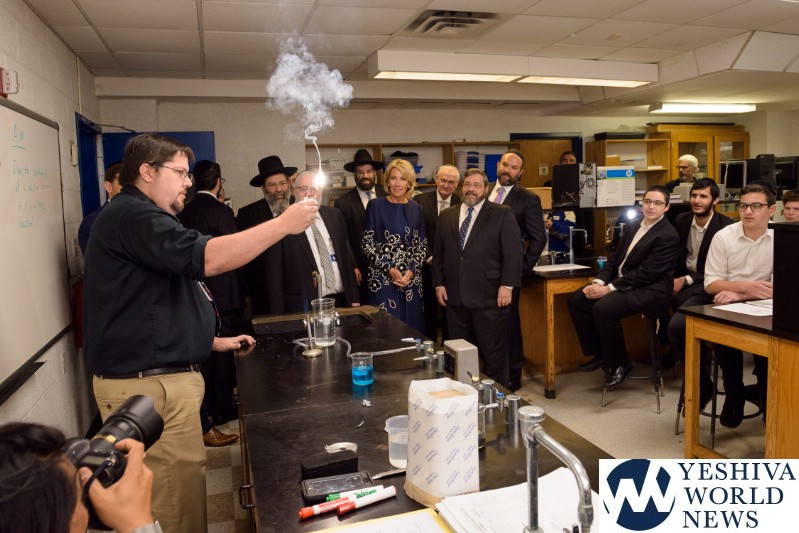 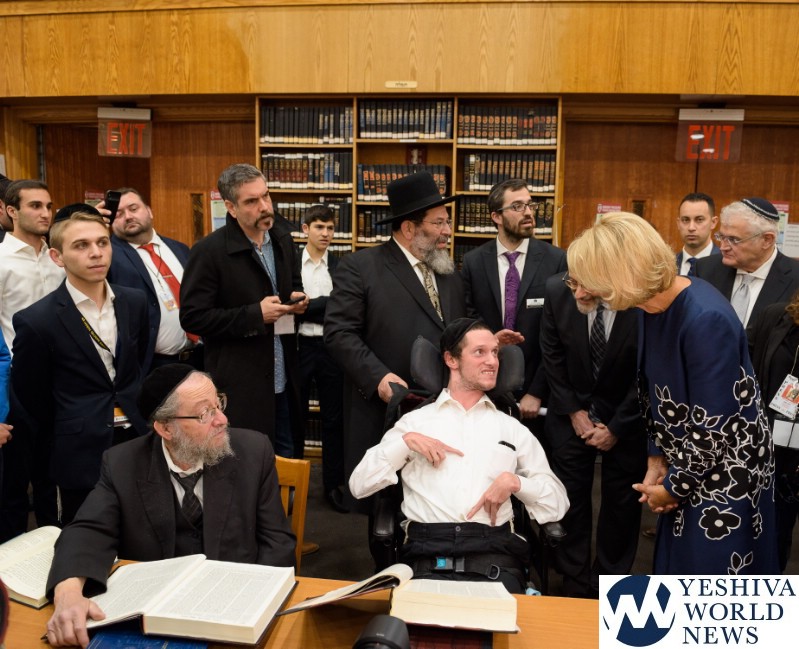 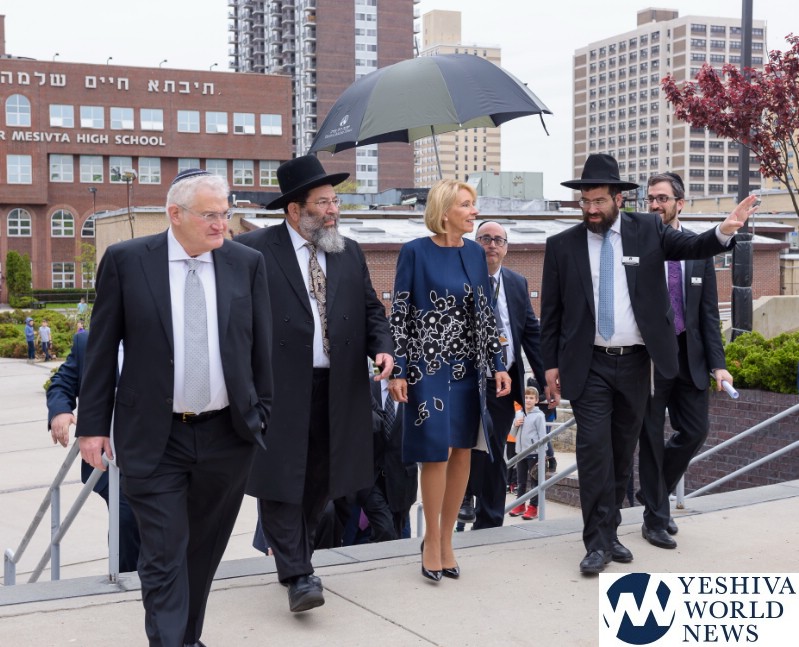 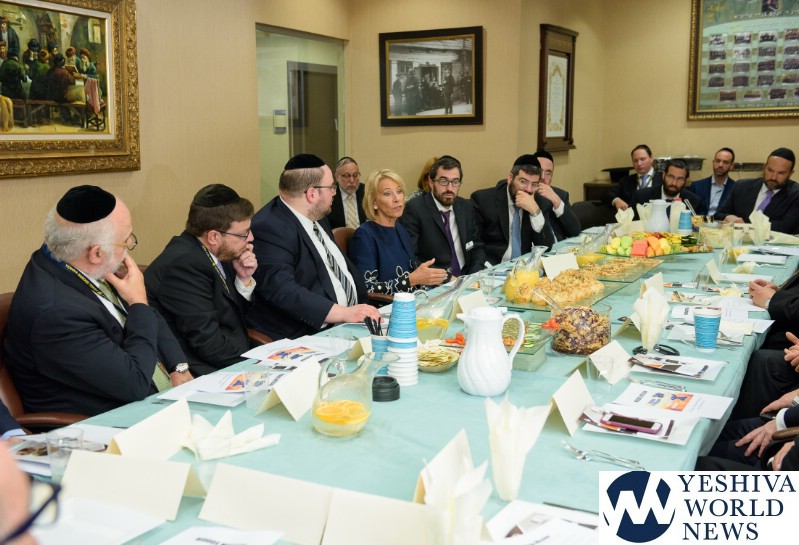 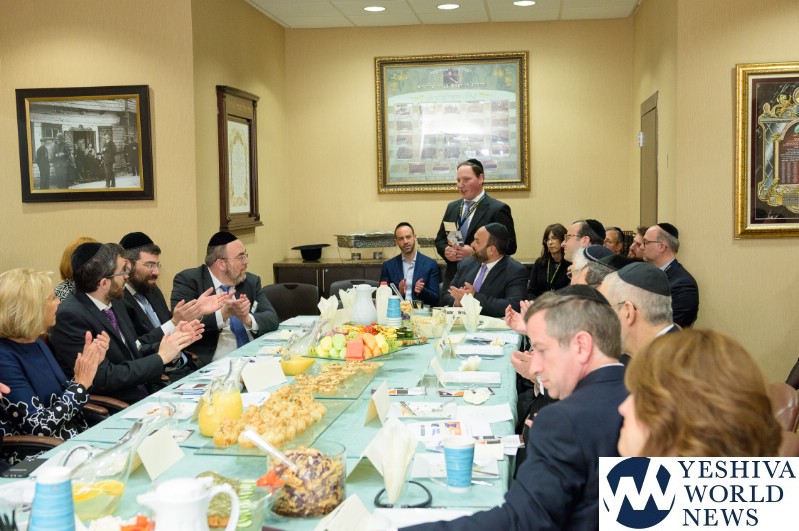 At Yeshiva Darchei Torah waiting for Secretary DeVos to tour the school pic.twitter.com/6kHFWYciIP

Students are learning about the order of blessings in third grade class at Yeshiva Darchei Torah leading up to arrival of ed secretary #Betsydevos pic.twitter.com/oaNpCZ3uNf

“We’re in the middle of discussing the appropriate order of blessings” teacher tells #DeVos as she enters a private school just now. pic.twitter.com/kfPYqy5sX8

Betsy DeVos gets schooled on the seven sacred fruits of Israel at a Far Rockaway boys yeshiva Wednesday. pic.twitter.com/kJI88ufSY2

#DeVos in a STEM Lab pic.twitter.com/RHhi8W0Nmm

“This looks like fun” — #DeVos as she sees vocational training facility pic.twitter.com/UBy5y41bbL

There is some question over whether DeVos will take q’s. So far, no, b/c she has to take a commercial flight to DC pic.twitter.com/89RWjVZUOT