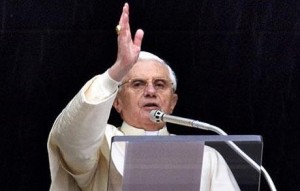 Pope Benedict, leader of the world’s 1.2 billion Catholics, said on Monday he will resign on Feb 28. because he no longer has the strength to fulfil the duties of his office, becoming the first pontiff since the Middle Ages to take such a step.

The 85-year-old German-born Pope, hailed as a hero by conservative Catholics and viewed with suspicion by liberals, said he had noticed that his strength had deteriorated over recent months.

In a statement, the pope said in order to govern “…both strength of mind and body are necessary, strength which in the last few months, has deteriorated in me to the extent that I have had to recognise my incapacity to adequately fulfil the ministry entrusted to me.

“For this reason, and well aware of the seriousness of this act, with full freedom I declare that I renounce the ministry of Bishop of Rome, Successor of Saint Peter,” he said according to a statement from the Vatican.

A Vatican spokesman said the pontiff would step down from 1900 GMT on Feb. 28, leaving the office vacant until a successor was chosen to Benedict who succeeded John Paul, one of history’s most popular pontiffs.

Elected to the papacy on April 19, 2005 when he was 78 — 20 years older than John Paul was when he was elected — he ruled over a slower-paced, more cerebral and less impulsive Vatican.

But while conservatives cheered him for trying to reaffirm traditional Catholic identity, his critics accused him of turning back the clock on reforms by nearly half a century and hurting dialogue with Muslims, Jews and other Christians.