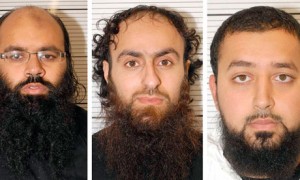 Three young British Muslims were convicted Thursday of plotting terrorist bomb attacks that prosecutors said were intended to be bigger than the 2005 London transit bombings.

A London jury found 27-year-old Irfan Khalid, 31-year-old Irfan Naseer and Ashik Ali, 27, guilty of being central figures in the foiled plot to explode knapsack bombs in crowded areas — attacks potentially deadlier than the July 2005 attacks on Underground trains and a bus which killed 52 commuters.

Prosecutors said the men, fired up by the sermons of a US.-born al-Qaida preacher, hoped to cause carnage on a mass scale. Their plot was undone by mishaps with money and logistics, and ended in a police counterterrorism swoop in 2011.

Prosecutors said targets and other details had not been finalized when the men were arrested.

But the jury at Woolwich Crown court agreed with prosecutors that the trio were the senior members of a home-grown terror cell inspired by the anti-Western sermons of U.S.-born Muslim cleric Anwar al-Awlaki, who was killed in Yemen in September 2011.

The suspects convicted Thursday were among 12 people arrested in September 2011 in counter-terrorism raids in Birmingham, central England.

Several other suspects have pleaded guilty to offenses related to the plot.