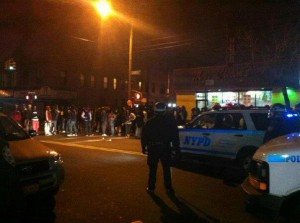 Dozens of people marched in front of a Brooklyn police station to protest the deadly shooting of a 16-year-old boy over the weekend, throwing bottles and rocks at the building before the situation was brought under control, police said.

Police estimated about 70 people marched to the 67th Precinct station in East Flatbush at about 9 p.m. and threw garbage and empty bottles at the windows. No officers were injured and there was no damage to the building.

The group continued to march from Snyder Avenue and ended up at Church and East 57th Street, where they continued to demonstrate.

Police officers in riot gear were seen along the block, with barricades up on the streets.

The NY Post reports that the group also looted businesses including a Rite Aide.

“They poured in here like 40 or 50 of them. They pulled the registers off the counters, they flipped over everything. They punched me in the face. Several of them did, not just one [person.] It was insane,” said the store’s manager, Lorenzo Evans.

At least three other people were bleeding from the face after being assaulted in the store, the sources said.

WABC reported that Councilman Jumaane Williams held a news conference saying, “This started off a peaceful vigil. Some people broke off and decided to go down to the police pct. On the way down the anger got the best of them. When people are angry they do things that don’t make sense. It doesn’t make sense to destroy your own neighborhood. But it doesn’t make sense to ignore your anger and that’s what I want to get across. We need to listen to what happened here to prevent it from happening again. You have a mayor and a police commissioner that haven’t been listening.”

Meanwhile, the two New York City police officers who fatally shot the teenage boy who they said pointed a gun at them have been placed on administrative duty.

Police say Kimani Gray was with a group of other males in Brooklyn Saturday night. Police say 16-year-old left when he saw police in an unmarked car. Authorities say the boy was acting suspiciously. The officers identified themselves as they approached him.

According to police, the boy then pointed a .38-caliber revolver at the officers who responded by firing 11 shots, striking him several times. Gray was pronounced dead at Kings County Hospital.