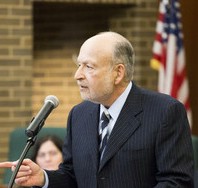 Like many other elections in various areas, the Frum community in Lincolnwood had a big influence on an election for Trustee for the Village of Lincolnwood held on Wednesday, and swung the outcome away from the ruling party. Ronald Cope is an Orthodox Jew and if his now “one vote lead” holds, 3 out of the 4 candidates that were backed by the Frum community will have won.

The following is via the Skokie Patch:

Independent candidate Ron Cope has been on a rollercoaster ride since yesterday’s elections.

At roughly 8 p.m., he was up 17 votes over John Swanson, who was running under the newly formed Independent Party of Lincolnwood (IPOL). But there was a problem: 10 of the 11 precincts had reported and word was that one of the machines was down.

At that point, Cope had 677 votes while Swanson had 660. A little after 9 p.m., the final precinct was called and Swanson was named the victor, winning by a total of seven votes.

Now, the tables have turned, and according to the Cook County Clerk’s website, Cope is now leading Swanson by one vote. One.

Cope has 756 votes while Swanson received 755. There are still mail in votes that need to be counted so right now it’s unofficial.

Turry said Cope acted like a gentleman when he thought he lost last night.

“He took it hard, but he understood these are things that happen in elections and I think everybody felt bad for him,” Turry said. “Two years ago he lost by 35 votes.”

Cope served as Lincolnwood’s corporate counsel for 20 years before he decided to run as a trustee in 2013.

“Your whole life you’re told how important it is to vote, because it could come down to that one vote,” Turry said. ” All my life I heard those things, because it could be that one person that turns the tide. And now it’s real in Lincolnwood.”