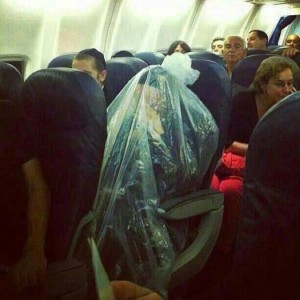 This photo was posted on many websites, including Gothamist, as well as Reddit  Seen in the photo is an Orthodox Jewish man who totally wrapped himself in a plastic bag while on a flight. Poster “FinalSay” on Reditt initially assumed the man was covering up because he was in front of women, but others pointed out that it is much more likely that the man is a “Kohen”, who are prohibited from flying over cemeteries.

It is unknown where this photo was taken, or where the flight was heading.

We report you decide….