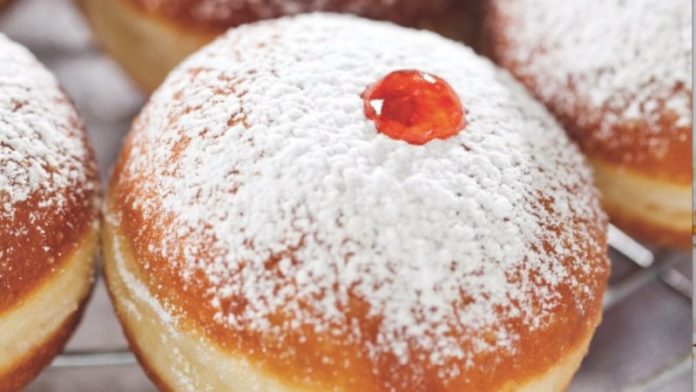 THE BIRTH OF THE JELLY DONUT

This is how it happens in its ideal form – in a perfect world.  Sometimes, but very rarely something else happens.  Sometimes, he will miss one of the donuts in the column or row.  It will not get the injection of jelly.

WHAT HAPPENS WHEN YOU PURCHASED IT?

When one purchases this rare, unjellied jelly donut it is known as a mekach ta’us – an erroneous transaction. This means that the person who buys an item, any item has a legitimate right to expect that the item should be free of any significant blemish or defect. Since this is true, the buyer has the right to declare the sale to be null and void.  He also has the option to retain the validity of the sale.  All this is found in the Rambam, Hilchos Mechira 15:6, and in the Chosahin Mishpat section of the Shulchan Aruch (232:7). Since the buyer is requesting a refund, the seller should refund the donut cost because it was a faulty sale.

PROTOCOLS OF THE REFUND

Now let us say that you entered into the bakery and purchased that jelly donut for Chanukah.  The donut is defective – it is missing the jelly.  You decide to send in your son, who just got his driver’s license.

The woman behind the counter says to him, “I am sorry, but you must bring in the plain donut first in order to get a refund.”

Your son argues, “Look, you should have checked it out before you put it in the display as a jelly donut.  And what do you want me to do?  I should bring in a half-eaten donut that is missing its jelly?”

Who is correct?  With whom does the Halacha lie?

ANSWER MAY BE IN A MISHNA

It seems that the Mishna in Bava Basra (92a) may indicate the answer.  The Mishna tells us that if one sells produce to someone else and it is planted but they do not grow, the seller is not responsible to refund the money.  Rabbi Shimon Ben Gamliel says that if one sold inedible planting seeds and they do not grow, the seller is responsible for them.

The Shita Mekubetzes quotes the Ran who asks:  Isn’t this patently obvious?  Why would anyone assume otherwise, it is clearly a case of Mekach Taus – an erroneous sale.  There is no need for this to appear in our Mishna!

MISHNA IS TEACHING US HOW THE SALE IS REFUNDED

The Ran answers that Rabbi Shimon Ben Gamliel, in actuality, is not teaching us that it is a Mekach Taus – an erroneous sale.  Rather, he is teaching us the protocols of refunding the sale.  The seller cannot claim that he will only refund it if the seeds are returned.  He must return the money and worry about getting the seeds back on his own.

The Shulchan Aruch (CM 232:20) rules like Rabbi Shimon Ben Gamliel, but does not discuss the protocols of refunding the sale.  It would seem that if the Ran is the final ruling in halacha, then our bakery lady is wrong and the bakery should refund the money.  The Ritvah and the Meiri also agree with the Ran’s position.  Indeed, the Ritvah extends the ruling to all business dealings – including jelly donuts.

ARE THE CASES THE SAME?

One may perhaps raise the argument that the Ran only gave this explanation in our Mishna’s case, where the seeds are no longer extant.  However, when the item is still in existence, perhaps the refund protocols are different!  This counter-argument is, in fact, raised by the Raavad in Hilchos Mechira (16:3).  However, the Maggid Mishna proves that the Rambam (ibid) holds otherwise.

SHOULD HAVE CHECKED THE DONUT

The Shita Mekubetzes quotes the Tosfos HaRosh in explaining that in fact, the seller should have checked the merchandise the make sure it was what it was purported to be.

RETURN OF THE BAKERY LADY

But now what?  Can’t the bakery lady claim, “Kim Li Kehani Poskim like the Raavad?  I am certain that the halacha is like the Raavad in this regard and since I am holding onto the money (Muchzak) , what I say goes!”?

The answer to this is, “Yes, she can.  However, if you paid by credit card there is nothing in ‘Muchzak’ which forbids you from instructing the credit card company not to pay it.”

The moral of the story?  Always pay by credit card if you can.