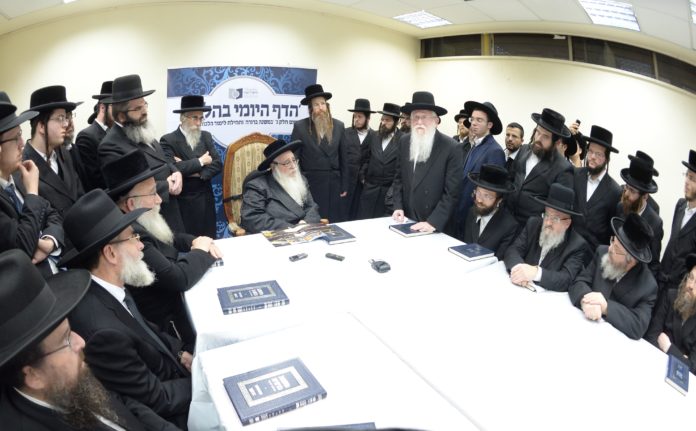 In his brief but heartfelt comments, the Rachmastrivka Rebbe said, “I can’t tell you what a zechus it is to enable Yidden to learn and know halacha. It is the foundation of Klal Yisrael and a zechus that brings with it all of the brachos in the Torah.

“Several years ago, before the establishment of Daf HaYomi B’Halacha,” the Rebbe continued, “we said, what will be? In yeshivos they learn Gemara, a great and wonderful thing, but what will be with halacha l’maaseh? Bochurim don’t know halacha… and then Dirshu came and they enabled people to learn halacha and actually know what to do.”

The Rebbe candidly said, “A Yid came to me this week and described how had learned and toiled in Torah when he was in yeshiva, but after his marriage, questions came up in hilchos Shabbos and he had no idea what to do! He had to ask his wife. She knew, because she had been taught in school but he didn’t because he had never learned hilchos Shabbos. What a shame!”

The Admorim made a l’chaim with Rav Dovid Hofstedter, Dirshu’s Nasi in honor of the siyum and the commencement of Chelek Daled, the laws of Eruvin.

Later in the week, a siyum on Chelek Gimmel was held at the home of the Sanzer Rebbe, shlita, in Netanaya. It was also attended and addressed by HaGaon HaRav Yigal Rozen, shlita, RoshYeshiva, Ohr Yisrael of Petach Tikvah and HaGaon HaRav Shmuel Eliezer Stern, shlita, Rav of Western Bnei Brak.

The Sanzer Rebbe quoted the Shulchan Aruch Harav that writes in hilchos talmud Torah that a person who is unable to learn all day, should learn halachos that are relevant l’maaseh. Every Yid needs to know halacha. Without halacha he cannot properly be a Yid.

The Rebbe added, “It is permitted to envy the zechus that Dirshu has in enriching all of Klal Yisrael with this knowledge. I daven that we should have a chelek in this mitzvah!”

Rav Yigal Rozen said, “For those who learn all day, their main learning is Gemara nevertheless, the shaar, the entranceway to the bais medrash of Gemara, Rashi and Tosafos is learning and knowing halacha.”

Drashos in the home of the Sanzer Rebbe were also given by HaGaon HaRav Mordechai Minzbeg, shlita, Rav of the Masmidim and Rav Dovid Hofstedter.