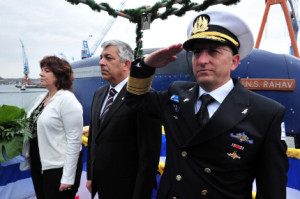 The INS Rahav, the Israeli Navy’s 5th Dolphin-class submarine, was inaugurated today by the IDF and Ministry of Defense at a ceremony in Germany.

Israel’s fifth Dolphin-class submarine, the INS Rahav, was unveiled on Monday, 19 Iyar 5773 at a special ceremony in Kiel, Germany attended by Commander in Chief of the Israeli Navy Rear Admiral Ram Rothberg, Director-General of the Ministry of Defense Ehud Shani and a delegation of Israeli and German officials.

The ceremony culminated in the smashing of a celebratory bottle of champagne on the hull of the new vessel.

The submarine was purchased after an extensive development and acquisition process led by the Ministry of Defense’s Procurement and Production Directorate in cooperation with the Israeli Navy.

The INS Rahav is scheduled to arrive in Israel in the coming year, upon completion of the installation of all of its operational systems. The INS Rahav is considered to be one of the most advanced submarines in the world, and is the most expensive piece of machinery that the Ministry of Defense has procured for the IDF. Israel Radio reports the vessel cost €400 million, adding the German government picked up one-third of the cost.

The Dolphin is a versatile vessel, possessing a wide range of capabilities fit for a large variety of missions. The submarine fleet represents the technological cutting-edge of the Israeli Navy, the IDF and the State of Israel. Soldiers in the Israeli Navy’s submarine fleet engage in operational activity day after day under a heavy veil of secrecy.