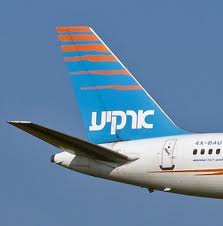 Arkia Airline announced on Sunday 25 Iyar 5773 that it was suspending flights between Eilat and Haifa until Thursday 29 Iyar after the IDF announced it was closing the skies over Haifa to all civil aviation until that time. The will impact the airline’s two daily flights which carry a total of 300 passengers.

The closure of the airspace over the city follows the military’s announcement earlier Sunday that Iron Dome defense systems have been deployed in both Tzfas and Haifa.