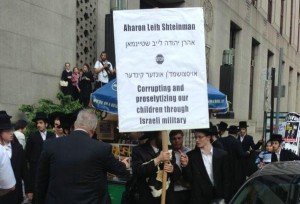 In a brazen act of public Chilul Hashem, and Bizayon Hatorah, one Satmar Chosid who attended Sunday’s Satmar-organized anti-Israel protest in Manhattan’s Federal Plaza, took the protest to an entirely new level. The man held up a large sign which had the word “STOP”, and called Maran Hagon HaRav Aron Leib Shteinman Shlita by his name, without even the title “rabbi”. Below that were the words “corrupting and proselytizing our children through Israeli military”.

Only one person out of the crowd of 20,000 grabbed the sign away from the man, at which point the NYPD intervened, and the man was escorted away from the area. It is unknown if he was arrested, or just driven to another area, as he was seen being placed into a police car. 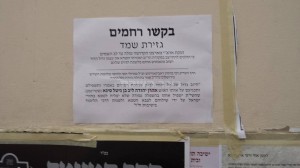 Just last week in a Satmar Bais Medrash in Kiryas Yoel, a sign was seen hanging which called for people to daven for the downfall of the gadol hador when reciting “Vilamalshinim” in Shemonah Esrei [Click image to the left to ENLARGE].

Approximately ten years ago, when Maran rav Shteinman visited New York, thousands of people participated in a Kabolas Ponim in Boro Park. At that event, hundreds of Satmar Chassidim protested outside the massive tent at the 18th Avenue park in Boro Park. Dozens of buses brought Bochrim from the Satmar Yeshivos to protest, where they stood holding degrading signs and calling the Gadol Hador names for three hours.