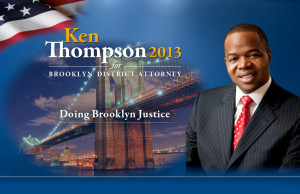 A big boost for the campaign to oust Brooklyn District Attorney Joe Hynes, as New York City’s largest union, 1199/SEIU United Healthcare Workers East, today announced its unanimous endorsement Ken Thompson for Brooklyn District Attorney. The union has supported Mr. Hynes in the past, and this defection combined with Hakeem Jeffries and Yvette Clarke’s recent endorsement is another major sign of momentum for Thompson.

Representing over 220,000 members in New York City and 100,000 members and retirees in Brooklyn, 1199SEIU’s endorsement brings with it an unmatched election operation that includes thousands of volunteers on the ground, a massive phone banking operation, direct mail and other get-out-the-vote activities. In a major blow to D.A. Hynes, today’s endorsement from 1199/SEIU comes on the heels of recent endorsements from Brooklyn Congressmembers Yvette Clarke and Hakeem Jeffries, Bay Ridge Democrats, Lambda Independent Democrats, Brooklyn-Queens NOW PAC and Muslim Democrats of New York.

“1199 SEIU is extremely proud to endorse Ken Thompson for Brooklyn District Attorney,” said George Gresham, President of 1199 SEIU United Healthcare Workers East. “Ken’s impressive life story, strong record fighting for justice, and deep commitment to standing up for working families are what make him the clear choice in this race. Ken is the right leader with the right vision to bring real change to the Brooklyn District Attorney’s office. Our members will work hard to ensure that Ken is resoundingly elected this fall.”

“I am so honored to have the unanimous support of the hardworking men and women of 1199/ SEIU. From the civil rights movement to health care reform, 1199 has always been on the right side of history. This is an incredible show of support for our growing campaign to restore integrity to the Brooklyn District Attorney’s office,” said former federal prosecutor and candidate for Brooklyn D.A. Ken Thompson. “I would like to thank the members of this outstanding union for their support – you can rest assured that I will stand up for Brooklyn’s working and middle-class families when I become District Attorney. Together, we will build a stronger, safer and more just future for our communities.”

The union plans to direct mail, phone-bank and go door-to-door to all members and retirees across the borough