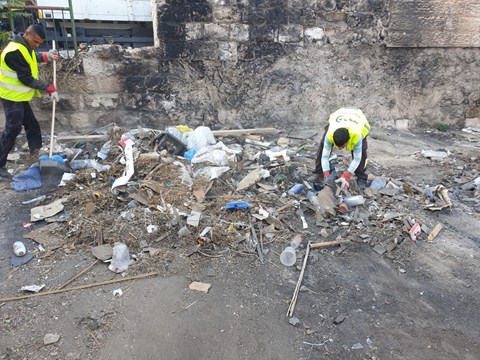 The neighborhood known as the “Batei Warsaw” or Nachalas Yaakov, located near the Kikar Shabbos intersection has not had large scrap iron and junk removed from the neighborhood for some 15 years. On Sunday, history was made when the city sent in cranes and garbage trucks to remove the debris that had been collecting for a decade-and-a-half.

In total, five cranes were used to clear the neighborhood. Residents reported to BeChadrei Charedim that Jerusalem Mayor Moshe Lion walked by the neighborhood on Sukkos and was shocked to see how the neighborhood was unkempt. He immediately decided to take steps to clean the area. Until today, cleaning crews have not entered, but it is expected that from now on crews will be cleaning the area on a regular basis.

“People don’t know how to say thank you,” one of the residents told BeChadrei Charedim. “It is important to understand that for the past 15 years no one cleaned up here. We need to show our gratitude to the Mayor for having the trucks come. Finally, our neighborhood feels clean.”