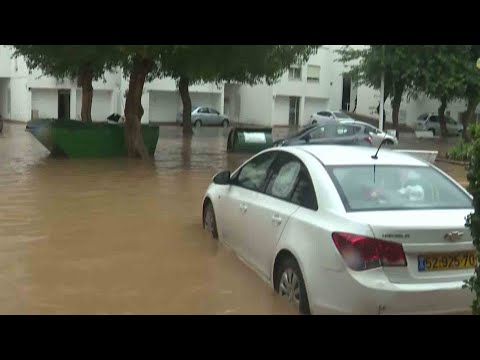 Torrential rain in northern Israel last week which broke a 51-year record of rainfall within a two-year period, caused devastating flooding in Nahariya, leading to the death of Moti Ben-Shabbat who was swept away by the floods as he was rescuing a mother and child from a car.

An incriminating Zman Yisrael report on an investigation into the flooding said that a flawed decision by former Nahariya mayor Jacky Sabag to divert a section of the Ga’aton River, which bisects the city, led to the flooding last week.

Jacky Sabag, who was the city’s mayor for a total of 27 years before being defeated by a huge margin in the 2018 election to Ronen Marelli, chose to ignore multiple warnings that the diversion of the Ga’aton River’s path to construct the Arena Mall would be hazardous and lead to dangerous flooding.

Water drainage experts and environmental activists battled Sabag for years against his plan to construct an underground pipe and concrete channel in place of a section of the river, warning that the man-made replacement would not hold the water in heavy rain.

“On normal days that’s fine, but when there is a flood, the water is forced upward and bursts out, because it has nowhere to go,” environmental activist Orit Keren-Reich told Zman Yisrael.

The activists used all legal means available to fight Sabag, eventually bringing the battle to the Supreme Court, which noted the plan’s flaws and made some changes but ultimately ruled that the project could be carried out.

Keren-Reich said that the writing was on the wall for many years. “I was just sitting and waiting for a disaster to happen,” Keren-Reich said. “And now the state will have to invest a huge amount of money to repair what could have been prevented.

“We were lucky that because of the Supreme Court case, the plan to build a second floor in the parking garage was dropped and one floor was built instead of two. Now that parking lot is flooded with water and mud but if there was an additional floor it would have been a death trap.”

Tal Himi, Nahariya’s chief engineer since the 2018 election, who has frozen all further plans to divert the river, confirmed what Keren-Reich said. “The concrete channel at the eastern mouth of the river into Nahariya is the cause of the catastrophe that occurred at the Ga’aton,” he told Zman Yisrael. “It is too narrow to contain the river.”

However, although Himi said that Sabag’s diversion plans were “megalomaniacal,” he attributed most of the blame to Nahariya’s Drainage Authority, saying that they were also warned of the potential danger of the project. However, a recent Ynet report said that the Drainage Authority blames Sabag.

The report, which did not address the rerouted river project but focused on the flooding in general, said that a plan to prevent the frequent flooding every winter in Nahariya has existed for a decade but has never been implemented. The city’s Drainage Authority blamed Sabag, saying: “The previous mayor has torpedoed all of our efforts for years to carry out the project for his reasons to the point that we were forced to file a petition to the court.

Israel’s Agriculture Ministry, which is responsible for water drainage throughout Israel, also blamed Sabag. “The flooding in Nahariya is mainly due to the collapse of the municipal drainage system and the previous mayor’s unwillingness to remove elements that blocked the water flow, such as the bridges he built in the city center,” the Ministry said. “Now, Nahariya’s current mayor is working with the Western Galilee Drainage Authority to reduce the flow of water in the Ga’aton.”

Mayor Ronen Marelli estimated that the damage to Nahariya from last week’s flooding is about NIS 200 – 300 million.

“The destruction here is unbelievable,” a Nahariya resident said. “There are families who still can’t get into their homes. There are businesses that will not be able to recover.”

Former mayor Sabag refused to comment on the report.