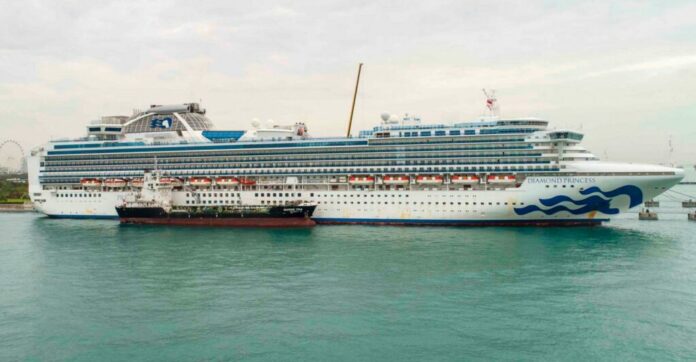 Nicole Ben-David, 51, one of the 15 Israeli passengers on the “Diamond Princess,” the Japanese cruise ship which is being quarantined after a passenger was diagnosed with the coronavirus, was interviewed on Israeli radio on Wednesday morning.

Ben-David is on the ship, which is anchored off Yokohama port near Tokyo, with nine other family members but right now she’s isolated in her room with her mother, Bruria Levi. A total of 174 people on the ship have been diagnosed with the coronavirus by Wednesday morning, including a quarantine official, and have been evacuated to local hospitals.

Fortunately, the results of the test for the Israeli passenger who was suspected of having contracted the virus came back negative on Tuesday.

“Today the captain announced that another 38 passengers are being evacuated,” Ben-David said. “The situation is beginning to be not so pleasant. We don’t feel at ease. People are very very worried about the increasing numbers [of people infected with the virus]. We don’t know if we’re going to get infected – from the workers or from the air or from the plumbing. We don’t how the virus is transmitted. Is it transmitted through the air or through saliva? We don’t know, we don’t have enough information.”

Ben-David is on the 11th floor with her mother and her other relatives are on the 5th floor but they haven’t seen each other since last Tuesday evening since they’re isolated in their rooms. This week the captain is allowing the passengers of each room to go up to the deck for some air for an hour as long as they wear face masks and stay two meters away from other people.

Ben-David and her mother went up to the deck but they ended up returning to their rooms after 20 minutes because they’re scared of catching the virus from other passengers despite the face masks. Their fear is compounded by the fact that no one really knows how the virus is transmitted.

“We’re not sure that we’re really safe [from catching the virus],” Ben-David said. “No matter what precautions we take it doesn’t seem that we’re actually in quarantine.”

Ben-David said that every passenger received a thermometer and are required to report their temperatures a few times each day. Waiters knock on their doors at mealtimes and hand them their meals wrapped in sterile packaging on trays. “The workers don’t enter the rooms or come in to clean, they don’t come close to us.”

Earlier this week, Ben-David told Ynet: “Every Israeli passenger received a package from Chabad in Tokyo, from ‘Rav Mendy,’ before Shabbos with kosher meals, candles, wine for Kiddush and bread. It was very heart-warming but it also caused us to feel homesick.”

Shalva Dahan, another Israeli passenger on the ship, told Walla earlier this week: “When I heard that an Israeli woman might be infected with the virus, I got depressed and cried. But I can’t let myself break down. It’s very difficult to be here but we don’t have a choice – this is the situation. We’re depressed but we can’t let ourselves fall apart. We’re scared that if we let ourselves collapse we won’t leave our beds. My children and grandchildren call every day and tell me they’re waiting for me to come home. I’m not letting myself fall apart only because of my children.”

“We’re also very worried about how we’re going to return home,” Ben-Davis said on the radio interview. “We don’t have a way of getting home because the flight we reserved has a stopover in Russia and there’s no way we’re getting on it. We’re not interested in being sent to Siberia for 14 days, which is what we were told will happen. I’m not sure that there’s any country that will allow us to pass through on a connecting flight.”

Japan’s health ministry said Wednesday that 39 new cases of the virus have been confirmed on a cruise ship quarantined at a Japanese port.

The update brings the total found on the Diamond Princess to 174 cases.

The ministry also said the virus was confirmed in an official who participated in the initial quarantine checks the night the ship returned to Yokohama Port near Tokyo on Feb. 3. The quarantine official is being treated in the hospital.

The night of the ship’s arrival, Japanese health officials began medical checks on all of the ship’s 3,700 passengers and crew after one previous passenger tested positive for the virus.

The U.S.-operated Diamond Princess had completed a 14-day tour during which it stopped at Hong Kong and several other Asian ports before returning to Japan. An 80-year-old man who disembarked in Hong Kong tested positive for the virus, prompting Hong Kong to notify the ship and Japanese authorities, who then ordered the quarantine and testing.

Concerns over the virus have rerouted and canceled other cruises. The Westerdam cruise ship carrying 2,257 passengers and crew is now in the Gulf of Thailand with nowhere to dock after being refused entry in Japan, Taiwan, the Philippines and Thailand. There are no confirmed cases of the virus on board, but it stopped in Hong Kong less than two weeks ago, which is within the incubation period of the virus.

COVID-19 is a coronavirus that emerged in China in December.