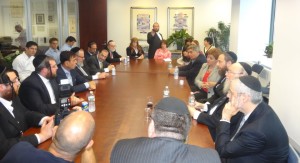 [VIDEO IN EXTENDED ARTICLE] City Council Speaker and candidate for Mayor, Christine Quinn met with an array of Jewish leaders in a pre-Rosh Hashanah meeting that gave each member in attendance the opportunity to voice their opinions and concerns on issues affecting their communities, places of work, and families. A wide range of issues were brought up ranging from security for Yeshivas to helping middle class families struggling with making ends meet.

Ms. Quinn presented herself as a champion of the middle class, citing her recent success in cutting restaurant fines that will save the industry over $10 million a year and allow small business owners to support their families. Even more importantly was her willingness to acknowledge areas in which New York has not currently performed up to expectations, including issues relating to the care of autistic children and other special needs children, stating that “we have fallen short in the past and need to and will do better.” She specifically referred to legislation that she will uncompromisingly propel into law as mayor that will eliminate expensive lawsuits against the Department of Education and prevent parents from needlessly suffering as they search for a culturally sensitive and appropriate setting for their children.

Several members of the event spoke to connect issues facing all New Yorkers to the Jewish Community. One attendant inquired about the growing complications in the world and how increases in security must respect the cultural traditions of the Orthodox Community. Quinn responded with an openness to make all cultural groups part of the effort to train NYPD officials in respecting the customs of beliefs of every citizen of the city.

“Chris Quinn displayed a level of expertise on issues facing our community and this forum allowed for an open exchange of ideas that exuded familiarity with the intricate needs of of the NY Jewish community” remarked one participant as he left the meeting.

“Chris Quinn, by meeting with the community in such a thorough forum a mere 13 days before the primary is indicative of the value she places the input of the Jewish Community on important manners facing all New Yorkers, which I am sure she will continue to demonstrate as mayor,” said Ezra Friedlander, CEO of The Friedlander Group and senior adviser to the Christine Quinn campaign.