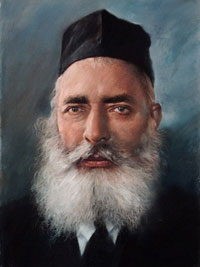 There is a near prophetic thought that the great Mussar giant, Rav Yeruchem Levovitz zt”l, the Mashgiach of the Mirrer Yeshiva in Europe, expressed some 100 years.  The relevance to today’s crisis is uncanny. It behooves us to pay close attention to it (the original can be found in Daas Chochmah uMussar Vol. II #27).

THE OBJECTIVE OF CREATION

“And you shall know today, and set in your heart, that Hashem is the G-d in the heavens above and on the earth below –  there is no other” (Devarim 4:39).

The Ramchal explains in his Daas Tevunos, that this realization is the objective of the entire Creation and all that happens.  Through all of Hashem’s actions. Through all of His great deeds from the time He set Man down upon the earth.  Through all that Hashem had promised through His prophets to do for us.  We are compelled to realize with absolute clarity one thing:  Ain Od Bilvado – there is nothing besides Him.

Essentially, there are only two choices:

There is nothing in between.

Either one places his trust in Man or else he places his trust in Hashem. To the extent that he trusts in Man, wherein he “makes ‘flesh and blood’ his strength” (Yirmiyahu 17:5), he embodies the idea of, “from Hashem he turns away his heart.”  He is considering that –  “There is another.”

Conversely, to the extent that he invalidates Man, “Do not put your trust in officials…his spirit will leave him and he will return to the ground”, he is disproving the concept of “There is another”, and the knowledge of “There is no other” becomes tangible and real to him, and when He “has no other”, evidently He is “the Only.” Only these two possibilities can exist.

Thus, we find that as long as the “nothingness” of the world isn’t clear in a person’s mind, as long as he lends validity to the concept of “There is another,”  even if he does so in a very small and subtle manner – he has not yet attained the level of “There is no other.”

“There is no other besides Him” perforce means that any aspect of “There is another” in the universe is null and void to him; he must give it no validity whatsoever – and that is the complete Unification of Hashem.

The Ramchal further elaborates in Daas Tevunos on the topic of Adam HaRishon:

Adam HaRishon, according to the Ramchal, was lured at the very beginning by his own desires and drives. It was, therefore, necessary to show him by demonstration what he did not want to grasp through his intellect.  He had to be shown the essence of Evil – through the pain and travails of this world.  What he should have realized and attained before the Sin by means of wisdom and knowledge in that “There is no other besides Him”, he could only attain – after the Sin, Hakadosh Baruch Hu revealed the knowledge of, “There is no other besides Him” by demonstration, through the vicissitudes of the exile and the Six Millenia.

Who can gauge the awesomeness of those events? The time when Hakadosh Baruch Hu will show by active demonstration that “There is no other?”  That every “is” in Creation – really “Is not?”  That any given power is “nothing”, and that power itself is “nothing?”  And all this will be actively experienced!

This is a very frightening concept and who will be able to grasp it?  The entire Creation will have to be destroyed from beginning to end, to demonstrate that it is in actuality nothingness; when it will be deemed necessary to demonstrate that “My strength and the power of my hand” is non-existent, every support and crutch will be snatched from Mankind, all the fortifications and iron walls that Mankind relies upon will be demolished.

IN SPIRITUAL MATTERS AS WELL

it is self-evident that concerning materialism, it will be necessary to demolish and reduce Creation to rubble in its entirety in order to demonstrate its ‘emptiness and void’, because ‘there is nothing other than Him’. But it should be made known that even in spiritual matters it is the same; even on a spiritual level, the principle of ‘there is nothing other’ has to be made clear.

PSHAT IN THE GEMORAH IN SOTAH

This is the explanation of the entire order of events that our Sages listed (Sotah 49) regarding the “Footsteps of Moshiach” , since after everything, it will be necessary to demonstrate the complete “there is nothing other” experientially, and therefore, of necessity, everything, from beginning to end, will have to be torn down and demolished, both the physical world and the spiritual, in order to make their nothingness manifest.

A great dark dread descends upon us as we see what our Sages are enumerating there: “Our Rabbis taught: R’ Pinchas ben Yair said, that from the time the Holy Temple was destroyed, men of distinction and free men are shamed. Humiliation is heaped upon their heads. Men of righteous deeds are in decline. Manipulators and smooth talkers dominate.  And no one seeks the Truth.  And so, upon whom shall we rely? On our Father in Heaven.”

In the era of ‘the footsteps of Moshiach’, brazenness will be rampant; market values will plunge; the grapevines will flourish, yet wine will be expensive; rebuke will be non-existent; the council chambers will be rife with immorality; the Galil will be destroyed, the Gavlan will be desolate, the border residents will wander from city to city and find no rest; the wisdom of the educators will turn foul; those who fear sin will be despised; Truth will be absent; the youth will humiliate the elders, the elders will stand up before the young; a son will disparage his father, a daughter rise up against her mother and a daughter-in-law against her mother-in-law; a man’s enemies will be the members of his household; the face of the generation will be likened to the face of a dog; a son will feel no shame in front of his father..

And upon whom can we rely? On our Father in Heaven.”

THE NOTHINGNESS OF ALL OF MAN’S EFFORTS

The explanation is this: Our Sages are revealing to us that at the time of ‘the footsteps of Moshiach’, at the final End, we are shown the ‘nothingness’ that is inherent within Creation. We are shown that everything, in essence, is null and void. All the fortresses in which Man puts his trust, whether material or spiritual, are powerless. It will be to the point that:

Such a crushing disappointment, the highest wisdom will go bankrupt! Everything will explode and be destroyed, and on what can we lean, on what can we stand? (Behold,) there is nothing left, and yet we are still alive and enduring!

Your Name we have not forgotten; sublime wisdom does not stand by Man, “the wisdom of the educators will turn foul”, “those who fear sin” also not, “they will be despised”; even the holy Forefathers – their merit has been used up; all the fortresses of Man have expired and vanished, and in spite of this, Klal Yisroel is still alive and enduring in full force!

We are compelled to recognize from this that there is nothing else besides Him, the only thing that there is, is His Name, may It be Blessed, and that is what our Sages alluded to when they said “And on what can we rely on? On our Father in Heaven.”

From all the ‘footsteps of Moshiach’, from all the complete devastation, the foundational principle of “there is nothing besides Him” becomes crystal clear.  It is impossible to rely upon all else. They have all been bankrupted, and only upon our Father in Heaven can we rely – Only on His Name, may it be blessed, can we stand – “Our Eternal Redeemer is Your Name!”

The above is a re-edit of a translation originally done by Doresh L’Tzion. Rabbi Yair Hoffman can be reached at [email protected].

DURING THIS PERIOD OF CRISIS – IF ANYONE WISHES TO SELL THEIR CHOMETZ ONLINE – PLEASE EMAIL RABBI YAIR HOFFMAN at [email protected].