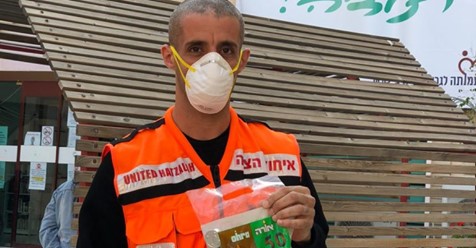 A 90-year-old woman from Bnei Brak was transferred to a coronavirus hotel in Tel Aviv after she tested positive for the virus before the last day of Pesach, United Hazalah wrote in a press statement.

As lich bentching time approached, the woman realized she didn’t bring any candles to bentch licht at the hotel and the hotel had run out of candles. She called her family who lived in Bnei Brak but they weren’t allowed to leave the city due to the lockdown. Instead, they called United Hatzalah to see if they could help.

Hatzlah put out a message to volunteers in the Tel Aviv/Yaffo area and a volunteer in Yaffo, Ebrahim Ayuty, responded. He rushed out on his ambucycle, bought candles at a local store and zoomed over to the hotel to bring them to the woman in time for Yom Tov.

The woman was extremely grateful to be saved the tzaar of not being able to bentch licht on erev Yom Tov.

“I am thankful that I was able to help,” Ayuty said. “I volunteer with United Hatzalah so that I can help people, no matter who they are or what they need. Normally, I respond to medical emergencies, but since the onset of the coronavirus in Israel, the lives of so many people have been turned upside down. It is a gift to be able to help people bring back a little bit of normalcy during this epidemic. Helping someone keep an age-old tradition alive is incredibly important to that person and therefore it is important to me as well.”