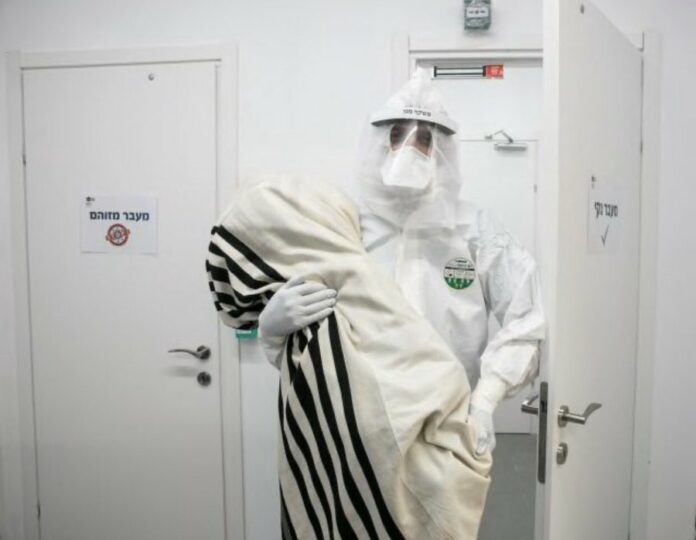 Dr. Abed Zahalka has worked at the Mayanei Hayeshua Hospital in Bnei Brak for years and has formed deep ties to the Chareidi community in the city, the Marker reported.

The veteran Arab doctor was recruited last week for an unusual mission, bringing a Sefer Torah into the hospital’s coronavirus ward. Dr. Zahalka donned full protective equipment and entered the ward holding a Sefer Torah wrapped in a tallis for the patients to daven with.

Minutes later the patients who could stand on their own were davening with the Sefer Torah. The staff, comprised of secular people, “kipos serugot,’ Chareidim and Arabs, were also very moved by the sight. They gathered by the screen showing the mispallelim, who are only meters away from them on one hand but completely separate from them on the other hand – in a sterile zone – davening with the Sefer Torah.

Zahalka said that bringing the Sefer Torah into the ward was very moving for him. “I felt like it deepened my connection – I’m part of the place, of the people, of the tradition.”

“I feel at home in Mayanei Hayeshua,” Dr. Zahalka told The Marker, “and not just at the hospital but in Bnei Brak in general. I’m like a ‘ben bayis” by many families in the city. I’m even very knowledgeable about Jewish halacha.”

“I’m a believing person and I see many believers here and many of the Rabbanim of Bnei Brak. I also think that there’s a connection between belief and the success of the treatment. You see people who simply give up versus people who were in very serious condition and fight the illness in an unbelievable way and recover.”