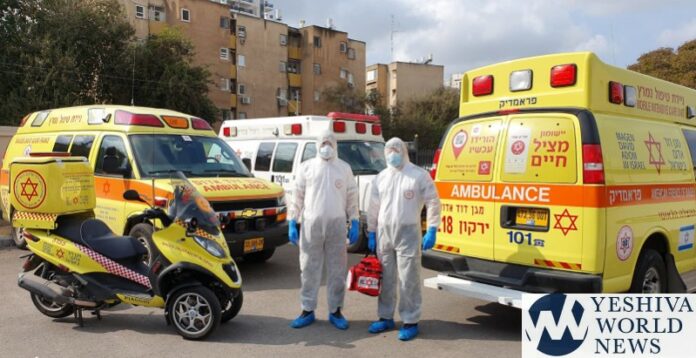 There are 15,466 confirmed cases of the coronavirus in Israel as of Monday, with 129 in serious condition, of whom 96 are ventilated. The situation of an 11-year-old girl from Beitar Illit has worsened and she is now in critical condition.

A Health Ministry report says that there were only 68 new coronavirus cases in Israel in the last 24 hours, reflecting a dramatic decrease in the morbidity rate. The last time there were fewer than 100 new cases in 24 hours was over a month ago, on March 20.

On Monday evening at 8 p.m. a one-minute siren will sound in Israel, commencing the first digital Yom Ha’Zikaron in Israel, during which memorial ceremonies will take place without audiences and be broadcast live for Israelis to watch at home.

IDF fighter jets were seen flying over Jerusalem on Monday in a practice drill for a maneuver that will take place on Tuesday during Yom HaZikaron.

A lockdown will go into effect on Monday evening as Yom HaZikaron begins and will continue through Yom Ha’atzmaeut on Tuesday night and Wednesday.

The Knesset voted on Sunday to cancel the order limiting Israelis to exercising within 500 meters of their homes. The rollback will go into effect on Thursday, following Yom Ha’atzmaut.

The Knesset is convening on Monday to discuss the outline for Israel’s schools to re-open, with the Education Ministry presenting a plan for opening schools after Yom Ha’atzmaut in a limited fashion.

Palestinian Authority Health Minister Mai al-Kaila announced on Sunday that there were no new coronavirus cases in the PA in the past 24 hours. Currently, there are 325 confirmed cases of the coronavirus in the PA and 17 in the Gaza Strip.