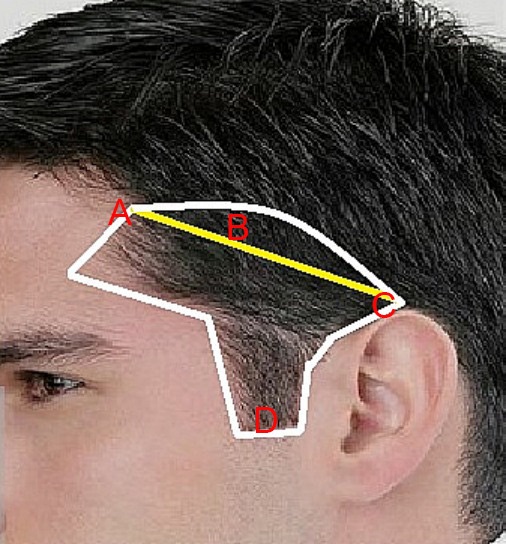 Today, a number of Jews will be getting haircuts.  If they are not careful, however, they could be in grave danger of violating a Torah commandment. Regardless, whoever reads this article before their haircut and follows the instructions below – will fulfill a Torah Mitzvah.

If you tell someone who is going to get a haircut about this Mitzvah – then you have been mezakeh that person with a Torah Mitzvah too. Oh, and one last thing. Reading it will help you avoid violating a Torah prohibition too.

The Shulchan Aruch (OC 60:6 and 589:8) rules that when performing a Torah Mitzvah – intent (kavana) is required. The issue is a debate among the Rishonim, but the final halacha is that it does.

THE MITZVAH UNDER DISCUSSION

REASONS FOR THE MITZVAH

The Tur (YD 281:1) indicates that it is a Mitzvah of which we are unaware of the underlying rationale, but we follow it because it is the commandment of the King.

WHERE ARE THE CORNERS?

Every Jewish man has two gun-shaped areas that pointed slightly upward that are located next to his ears. The best way to understand the parameters of where cutting hair on the head is forbidden is to imagine four parts of a gun: The muzzle, the barrel, the hammer and the bottom of the grip or the handle.

If you look at the picture you will see the outline of the gun’s four parts.

It is this gun which forms the pe’ah of the head in which we cannot round off our hair. It is found on both sides of the head.

Approximately three decades ago, this author had a conversation with Rav Chaim Pinchas Scheinberg zatzal, who indicated his view that the gun extends to even behind the ear toward the back of the head too. His view is that there is one gun following another gun. Most other Poskim do not seem to hold of this view.

Cutting hair in the gun-area short with either a razor blade, a shaver, a barber’s trimmer, a scissors, tweezers and depilatory cream is forbidden (this is the Rosh’s view [see Makos 3:2] that the Shulchan Aruch tells us to follow YD 181:3).

This means anywhere in the gun area. Even shaping or edging the gun area with a barber’s trimmer is thus forbidden.

It is forbidden to cut the hair so short that it is no longer bendable. In other words the top of the must be able to touch the root of the hair. In Hebrew this is called, “Lakuf rosho l’ikro.” These parameters can be found in Rambam Hiulchos Tumah (Tzaraas 8:10) and other Poskim cited in Minchas Yitzchok (Vol. IV #113).
Rav Elyashiv zt”l’s view (cited in Pe’as Ziknecha page 30) was that to fulfill all opinions it must be left a fifth of an inch long, or 5 millimeters. Generally speaking, a #2 shield leaves the hair bendable. A #1 does not – nor does a 1 and a ½.

It is a sad reality, but it seems to this author that a majority of other-wise Torah observant people – litvish, chassidesh and sefardic are completely unaware of these three things. They do not know the exact parameters of where the forbidden area actually is (where the gun is), that the area around the gun cannot be trimmed, and they do not know how short the hairs within the gun may be cut. This information should be spread in order to prevent people from unwittingly violating Torah laws.