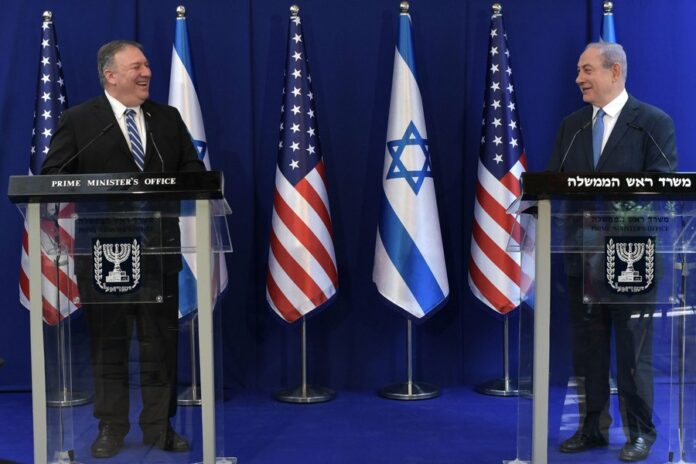 U.S. Secretary of State Mike Pompeo flew to Israel for a one-day visit, landing at Ben-Gurion Airport on Wednesday morning at about 8 a.m. and proceeding directly to Jerusalem to the Prime Minister’s Residence.

Pompeo received an exemption from Israel’s mandatory two-week quarantine for arrivals due to the coronavirus outbreak. His visit is the first to Israel by any foreign official since January, before the country largely shut its borders to halt the spread of the pandemic.

Netanyahu and his new coalition partner, Blue and White party leader Benny Gantz, postponed the swearing-in of their government until Thursday to accommodate Pompeo’s visit. Pompeo was scheduled later to meet with Gantz and with his fellow retired military chief Gabi Ashkenazi, the new government’s incoming foreign minister.

A major topic under discussion during Pompeo’s visit was the application of sovereignty in Judea and Samaria and the Jordan Valley.

On Tuesday, an Israeli soldier was killed in the Shomron after being struck in the head with a rock thrown off a rooftop. The military was continuing with a massive manhunt for the perpetrator and said it had arrested 10 suspects.

Pompeo expressed his condolence on the soldier’s death and reiterated that “Israel has the right to defend itself and America will consistently support you in that effort.”

Ahead of the visit, Pompeo told the Israeli daily Israel Hayom on Tuesday that the meeting was important enough to justify flying to Israel for face-to-face talks despite the pandemic. He declined to say whether the administration supports unilateral annexation by Israel, saying he was coming to hear Netanyahu and Gantz’s perspectives on the matter.

Glad to be in Israel to coordinate with @IsraeliPM @Netanyahu and @Gantzbe on countering two critical threats: COVID-19 and Iran. Israel and the United States will take on these challenges side-by-side. pic.twitter.com/aSrzD8MhkS

The coronavirus pandemic was also a topic of discussion and in his public remarks at a joint press conference, Pompeo made an oblique reference to China’s role in the pandemic, saying to Netanyahu: “You’re a great partner, you share information, unlike some other countries that try to obfuscate and hide that information. We’ll talk about that country too.”

As the already tense relationship between China and the US has worsened in the wake of the coronavirus pandemic, the US has reportedly been putting increasing pressure on Israel to decrease Chinese investments in Israeli infrastructure and so far has not been satisfied with the Israeli response.

Iran was the third topic of discussion and Netanyahu thanked the US for its strong stance against the Islamic Republic.

“The campaign we have been a part of to reduce the resources [that grand] Ayatollah [Ali Khamenei] has to inflict harm here in Israel and all across the world has borne fruit, has been successful, and we’re going to stay at it,” Pompeo responded.

“Even during this pandemic, the Iranians are using the ayatollah regime’s resources to foment terror around the world, even as the people of Iran struggle terribly. That tells you a lot about the soul of the people who lead that country.”

Blue and White leader Benny Gantz met with Pompeo following his meeting with Netanyahu at the U.S. Embassy in Jerusalem.

Incoming foreign minister Gabi Ashkenazi met with Pompeo following his meeting with Gantz. The two spoke about policies regarding Middle East regional developments, with an emphasis on the Iranian nuclear project and Trump’s peace plan.

Netanyahu and Gantz struck a power-sharing deal last month after three parliamentary elections over the past year resulted in stalemate. Under the deal, Netanyahu would remain prime minister for the next 18 months, even as he goes on trial on charges of fraud, accepting bribes and breach of trust. After a year and a half, Gantz will serve as prime minister for 18 months.

The agreement also stipulates that Netanyahu can advance plans to annex Israeli settlements in Judea and Samaria starting July 1, but that such a move must be coordinated with the U.S. while also taking regional stability and peace agreements into consideration.

Netanyahu said the new government offered “an opportunity to promote peace and security based on the understandings I reached with President Trump.”

Annexation would also give President Donald Trump an accomplishment to shore up his pro-Israel base, particularly politically influential evangelical Christian voters. Wednesday’s meeting could provide an indication of how far the administration is willing to allow Netanyahu to move.

Under the Trump plan unveiled in January, the Palestinians would have limited statehood while Israel would annex some 30% of the West Bank. The Palestinians have rejected the plan.