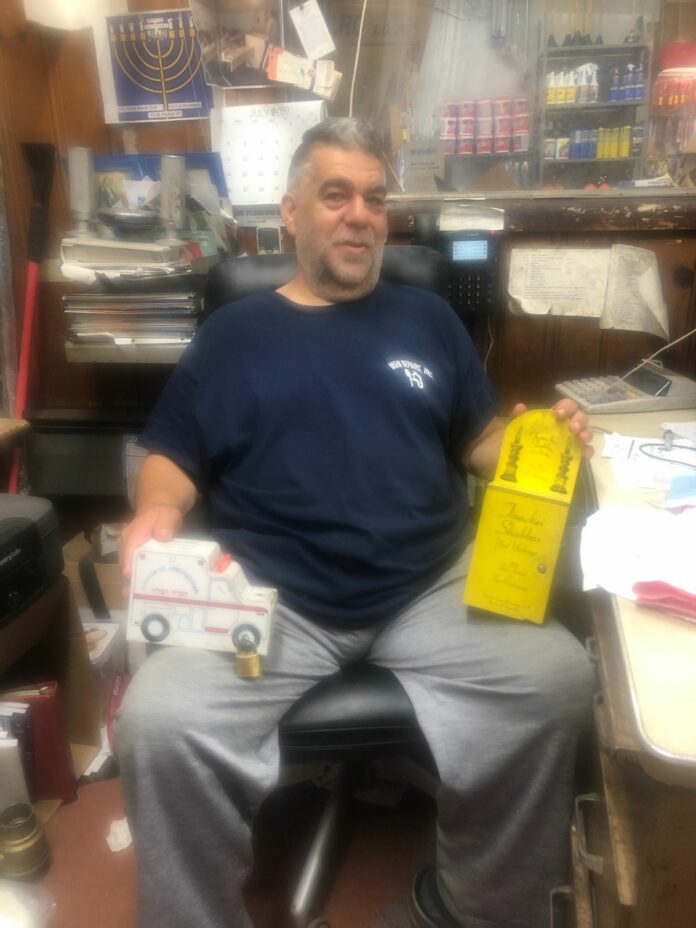 His name is Paulie and he works for Frank’s Plumbing, in Inwood, NY – a shomer Shabbos firm.  And he just had a quadruple bypass.  Paulie credits Hatzolah with saving his life.

A quadruple bypass is generally performed when four of the hearts major blood vessels are blocked and need to be bypassed. This means that four different blockages require blood to be rerouted around them.

“I have been working here for 24 years.  I have been encouraging people to put money in the Hatzolah Pushka at the counter. They got me to go to the Barbeque. You know, it’s better to give Tzadaka anonymously.  Eventually, I started going. I give them about $180 a month through encouraging people to put money in the Pushka.  I asked the Franks – they said it was alright. They are good people the Franks. Robert learns the Daf, you know. Anyway, getting back to Hatzolah.  Little did I know that, well, how much I would need them.”

Paulie had a heart attack a short while ago and has recently returned to work at the plumbing supply house after having bypass surgery.

“I am at work, I went outside to get some boxes to bring in.  Then I think that I have some indigestion. That’s what I thought.  I keeled over in pain.  It’s happened before.”

Paulie continues, “Then, Harry S., you know him, right? He’s Mordy S.’ son-in-law.  They are good people.  Anyways he drops off sushi every so often – leftovers from meetings or something.  Good people.  Anyways, he sees me keeled over outside. He asks, “What was that?”

I says, “Its nothing, indigestion.”

I says, “Don’t be bothering them.  This is indigestion.”

Harry says, “Look – let’s just have them check you out.  If its nothing, then like you said, they will just leave.”

Harry sends Hatzolah.  They come.  They come quick as lightning.  They measure everything. My sugar is in the high 300’s. My blood pressure was like 240 over 140.  I was having a heart attack.  They immediately take me to the hospital.

They saved my life. And so did Harry.  This Hatzolah is a wonderful organization.  Bro – they came to get me regardless.  I actually had the heart attack and then I had that bypass.”

I got a son who is twelve and a granddaughter who is twelve.  They are the same age and are close.  They went to karate school together.  I came home on Father’s Day from the hospital.  When I came home, I went outside, and I looked up to the sky and I thanked Hashem.  When you work around good people like I do, it affects you. You know what I mean?  I thank G-d every day for what I was given.”

“Anyone can put fifty in the pushka. But those who volunteer, those who give of their time every day? That is the real Tzadakah.  I would join if I could.  Maybe I could be the Shabbos goy or something.”

Rav Chaim Friedlander zt”l, the Mashgiach of the Ponovich Yeshiva, explains (Sifsei Chaim Moadim Vol. II p. 35) how Kiddush Hashem works.  He writes that Mesiras Nefesh expresses the honor and importance that man ascribes to fulfilling the ratzon hashem – Hashem’s Will.   When faced with an opportunity of doing the right thing – he negates himself and his own desires.  This is the meaning of Kiddush Hashem, for Kiddush means separation – separating oneself from all other things that attract mankind.  Hashem is separated.  Mesiras Nefesh whether it is effort in time and dedication or the actual giving up of life, shows how much we value the Ratzon hashem.  This is the highest level that can be achieved – Kiddush Hashem.”

The volunteers of Hatzolah do exactly that.  They are faithful servants of Hashem, whose sole goal is to do the ratzon Hashem and to save lives.  They are heroes and inspirations to all of us.

The same is true with the wonderful Frank family.  They live and breathe Kiddush Hashem in all they do.  Honesty. Intregrity. Chessed. Daf Yomi.  And in-depth iyun learning.  There is great Kiddush Hashem in the working Baalabus and it needs to be appreciated and highlighted more.

October 20, 2020 4:02 pm
29
Inspectors from multiple city agencies are once again running around Boro Park, doling out hefty fines to Mosdos, Yeshivas and businesses. The Inspectors were armed...

Save The Widow And Her Young Orphans! Gila is a...

Trump Envoy Traveled To Syria For Talks On Missing Americans