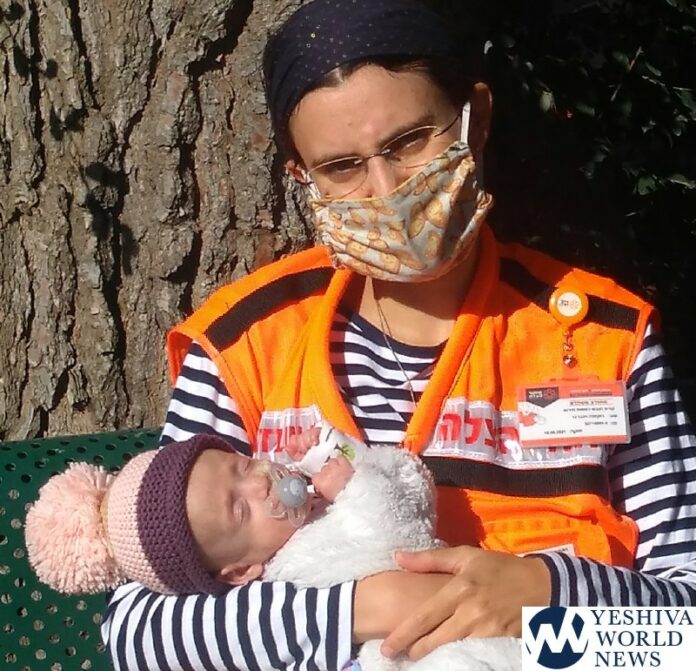 Three weeks ago, in the middle of the night, the greatest nightmare of Roxanne Weinberg’s life came true, as her daughter, Talia, who was born as a premature baby, choked right in front of Roxanne’s eyes.

Two years prior to the incident, Roxanne and her husband Michael lost a premature baby, a son, only eight days into his short life. The post-traumatic fears of having already lost a baby gripped Roxanne, but she did not allow the fear to prevent her from taking action. With a sense of clarity and level-headedness that bordered on the inhuman, Roxanne, an EMT-in-training in United Hatzalah, began to perform CPR on her own daughter while instructing her husband to call for help.

Roxanne saw that the back blows she was giving her daughter were ineffective and began compressions and assisted breathing and carried on until her friend and fellow United Hatzalah EMT Kalanit Taub, who lives nearby, arrived to assist.

“The whole incident brought me back to when my infant son passed away,” Roxanne said. “It was incredibly hard to move in that moment when I saw my daughter choking. While I thought that I wouldn’t be able to save her, I knew that if I did nothing she would die as well. I forcibly distanced myself from my own emotions and did whatever I could to save her life. I fell back on my training and on the information that I learned in my EMT course.”

Roxanne and Kalanit succeeded at opening Talia’s airway by using suction to remove the liquids that had collected in her throat. The pair moved so fast that Talia was breathing again even before the ambulance arrived. When the ambulance arrived they took Talia and Roxanne to the hospital for further care and observation, but the immediate danger was over.

Now, a few weeks later as both mother and daughter are at home, Roxanne reflected on her decision to become an EMT and explained how important it is for every mother to take at least a basic CPR and first aid course. “We have no way of knowing what will happen and when or where it will happen. As a mother, we are often the closest person to our child, it is incredibly important to know what to do if an emergency arises. It can save the life of your child just like it saved the life of mine.”

Roxanne lives in Efrat and has two children. Talia was born at the beginning of July at 27-weeks-old. the same day that she was born, Roxanne was supposed to participate in the graduation ceremony from her Emt training class. Instead, she watched the ceremony from the hospital while she was in labor. Talia stayed in the hospital until the beginning of September. Today she is four-months-old and is still connected to a monitor and a feeding tube, but she is expected to grow and live a normal life.

President and Founder of United Hatzalah Eli Beer spoke about the incident and said: “United Hatzalah volunteers work within their communities. Often they save people close to them, their neighbors, sometimes their friends or acquaintances. Roxanne saved a person who was more dear to her than anyone, and she did it by implementing the training she was given during her EMT course. We are truly proud of her and we look forward to her being an active member of our network of volunteers. Just two days ago, while driving with her family to do some errands, she responded to a serious car accident on Highway 60 and treated a Palestinian driver who was badly injured, until an ambulance was able to arrive.”