A massive blaze broke out in the early hours of Tuesday morning in the Unsdorf neighborhood of Jerusalem, trapping dozens of Chareidi families in at least six buildings due to the fire and heavy smoke, with rescue services spending hours rescuing families with babies, small children and the elderly. Some residents tried to jump from their buildings and one resident was lightly injured after jumping from his second-floor window, according to Kan News.

The fire began in a storage room on the bottom of a complex of six residential buildings on Rechov Sorotzkin and quickly spiraled out of control, spreading to nearby cars, apartments and additional storage rooms. Dozens of families were caught in the buildings, unable to escape due to the fire and heavy smoke.

Israel’s Fire and Rescue Services worked for hours to rescue the dozens of families caught in the building, with at least 30 residents requiring medical treatment for smoke inhalation, while at the same time firefighters fought to subdue the fire. Six residents were evacuated to hospitals, four to Shaarei Tzedek, one in moderate condition and three in light condition, and two to Hadassah Ein Kerem, a mother and daughter, both in light condition.

Fire and Rescue Services stated that 12 fire and rescue teams from Jerusalem stations were called to the scene. “Beginning at about 4 a.m., we have been dealing with a complex incident of a huge fire that broke out in a complex of six buildings on Rechov Sorotzkin, trapping a large number of residents with babies, children, and the elderly in their apartments due to the fire and heavy smoke surrounding the buildings,” said Lt. Eli Edri, commander of the HaUma fire station.

“As a result of the heavy fire, a large number of cars, among other things, were burned and several apartments and storage rooms were damaged. Right now our main effort is to rescue those caught in the buildings and prevent fire and smoke damage to the buildings. Firefighters are courageously entering into the fire and heavy smoke and rescuing families trapped in the buildings one after the other, while simultaneously extinguishing the fire.”

“It’s a complex of buildings where many families with children live,” said senior MDA paramedic Dubi Zienwirt. “We arrived at the scene with very large forces of ambulances, mobile intensive care units, and paramedics in MDA vehicles and motorcycles. When we arrived we saw thick smoke coming out of the buildings and an active fire in the parking lot. Residents were standing by their windows, on their porches and on their roofs and signaling to us. Firefighters began to extinguish the fire and rescue the trapped residents. A 30-year-old man jumped from the first floor and was lightly injured.”

“With the help of many first responders who arrived at the scene, we treated the injured, some of whom suffered bruises and abrasions from jumping out from the windows of buildings that were on fire in an attempt to flee the blaze, and we provided oxygen to many others suffering from smoke inhalation,” said United Hatzalah EMT Chanoch Re’em.

“I treated a man in his 30s who was injured after he jumped from his porch due to the thick smoke in his apartment,” said United Hatzalah EMT Ben-Tzion Spitzer. “He was evacuated to the hospital in moderate condition. The fire spread quickly through the building, burning the storage rooms as well as vehicles in the parking lot. We were working alongside the firefighters who were evacuating people from the building who brought them to us for initial treatment before they were transported to hospitals. Many of those who sustained injuries were infants and children who also suffered from smoke inhalation.”

The Jerusalem Municipality stated on Tuesday morning: “Jerusalem Mayor Moshe Leon arrived on the scene at dawn and instructed municipal employees to support the rescue services and residents and immediately begin the work of cleaning and rehabilitating the damaged buildings as the evacuation of the residents continues. Municipal teams are present at the scene and taking action to assist the residents.” 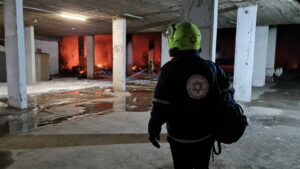 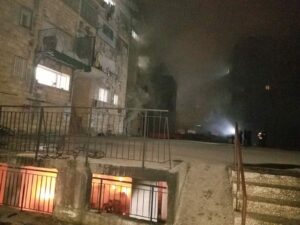