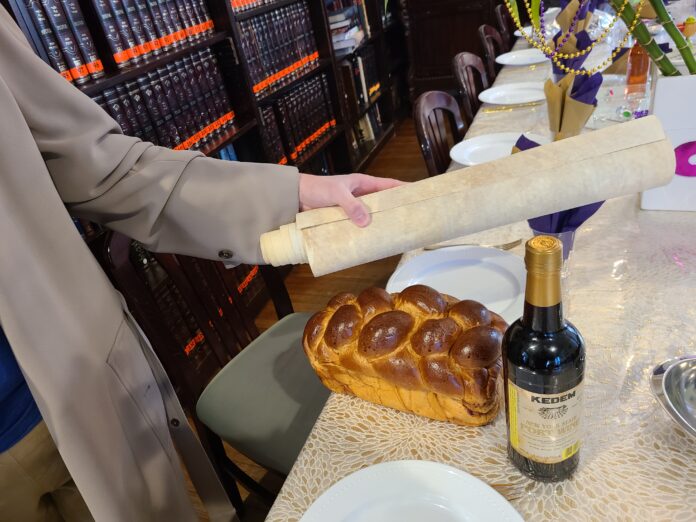 Never before in Jewish history was there such a need for kosher Megillahs.  The COVID 19 pandemic has caused numerous people to go into quarantine – either because they got COVID or were exposed to it.  These people need either to lein the Megillah themselves or to hear it from someone with antibodies who risks it.

Either way, more Megillahs are changing hands this Purim then ever before.

And speaking of hands, what happens if someone touches a Megillah klaf during the seudah?  Does he or she need to wash again?

THE VIEW THAT ONE DOES WASH

The Chayei Odom (Klal 40 Sif 20) writes that if someone touches a Torah, Tefillin, or a Megillah – he must wash his hands.  This is because Kisvei Kodesh impurify the hands.  However, the Chayei Odom writes that since he did not see it in the Poskim, one washes without a blessing.

THE VIEW THAT ONE DOESN’T HAVE TO WASH

The Chofetz Chaim at the end of Siman 164 in his Biur Halacha cites proofs from Rav Hai Gaon and other Rishonim that the impurity under discussion is only in regard to Trumah becoming impure but not to Chullin food.

However, later on, in his Hilchos Pesach (Biur Halacha beginning of Siman 475). The Chofetz Chaim cites the Shibulei HaLeket that clearly understands the Tumah as referring to food as well.

So what’s the answer?  At this point, this author does not have a resolution to the contradiction.  However, since the issue does seem to be a debate between Rav Hai Gaon and the Shinulei HaLeket, it is probably best to handle the Megillah with gloves and avoid the issue altogether.

Glad the Megillah was helpful!