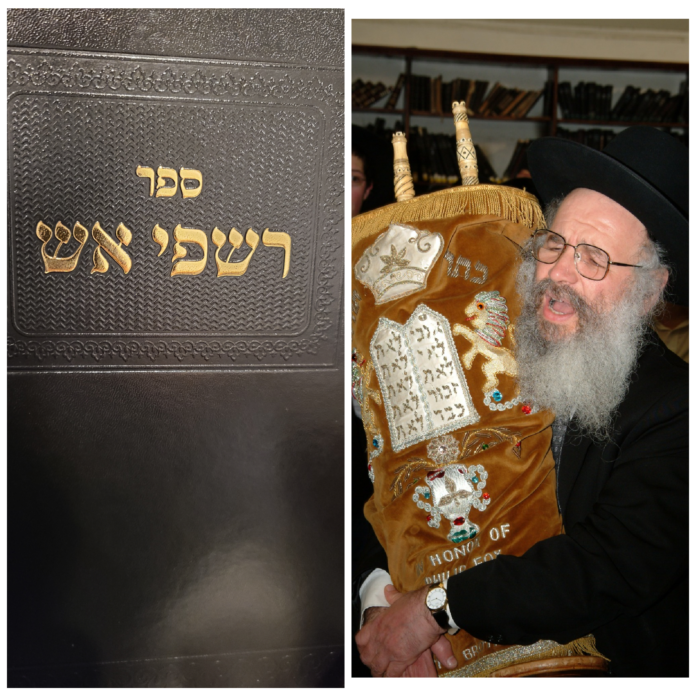 It is a sefer that was just released and is now entirely sold out.

It was written by HaGaon HaRav Shlomo Feivel Schustal shlita, formerly of Yeshiva Torah Temimah and now the Rosh Yeshiva of Yeshiva Gedola Tiferes Yerachmiel in Lakewood, New Jersey.  Rav Shlomo Feivel is the brother of Reb Dovid Schustal, one of the Roshei Yeshiva of BMG (Reb Dovid is one year older) and the son of Rav Eliyahu Simcha Schustal who was the Rosh Kollel of the Kollel attached to Bais Medrash Elyon and the Rosh Yeshiva of Bais Binyomin in Stamford, Connecticut.

The Sefer is entitled, “Rishpei Aish” –  the name taken from Shir HaShirim (8:6) which translates as “Coals of Fire.”  The sefer is aptly named, as the 56 chiddush-filled simanim embody the fire of Torah.  It also alludes to the author’s name.

In this remarkable work, Rav Schustal provides innovative answers to classical questions raised by the Rishonim and Acharonim. It is the culmination of many years of in-depth shiurim.  These shiurim were delivered both in Yeshiva Torah Temimah and in his own Yeshiva in Lakewood.  Over the years, Rav Schustal has taught thousands of talmidim.

The Sefer primarily deals with sugyas pertaining to all of  the Yomim Tovim and the yearly cycle.

For Pesach, for example, we have the following:

In Siman 14, Rav Schustal presents an answer the question of the Mishna LaMelech on the Rambam Hilchos Chometz UMatzah.  The Rambam rules that if the person performed a maaseh with the prohibition of bal year’eh he would receive malkos.  The Mishna LaMelech asks how that could be, since Bal yera’eh is considered a lav connected to the positive commandment of Tashbisu.

Rav Schustal answers that the positive commandment of Tashbisu, according to the Rambam, is a different type of category altogether.  It is, in the view of Abayeh, a positive Mitzvah designed to prevent a person from violating the future prohibition from point X onward.  This would, therefore, not be considered a classical Lav HaNitak L’assei. The Rambam holds like Abaye in this matter, notwithstanding the Tannaitic view otherwise in the Braisah.  Rav Schustal explains that a contradicting Braisah must hold of Abaye’s principle.  With this innovation, Rav Schustal answers a question of Rabbi Akiva Eiger zt”l (OC 445:1) and the Avnei Miluim (Teshuvah 19) on the Tur.

The piece is sheer brilliance.

In Siman 17, Rav Schustal presents an answer to the Meshech Chochma’s question about how the Lechem haPanim could be eaten on Erev Pesach when it falls on Shabbos, since the Lechem haPanim was considered Matzah.  This question, of course, is based on the Yerushalmi in Psachim (10:1) that one who eats Matzah on Erev Pesach is compared to one who oversteps boundaries during engagement.  That Yerushalmi is cited l’halacha in Shulchan Aruch (OC 441:2.)

Rav Schustal then discusses a debate as to when the prohibition of eating matzah starts. The Baal HaMaor holds that one may not eat Matzah at the time of the prohibition of six hours of the day.  The Ramban holds that it begins with the obligation of the search for Chometz – hence it is prohibited all day.  Rav Schustal then brings different reasons as to the prohibition and fits them into the analogy of the Yerushalmi.  The BaHag’s reason for the prohibition is so that so that the Mitzvah of eating Matzah will be beloved to him that night. The Rambam’s reason is to differentiate between the different types of eating. According to the Rambam’s reason – an exception would apply to the lechem hapanim.

Another unique aspect of Rav Schustal’s mehalech lays in his koach hahesber.  He will not hesitate to also invoke midrashim in helping to explain one side of a debate in how a topic can be explained.  He will fully explain both sides of a machlokes to ensure that the talmid understands it.

Each one of the simanim are a delight to explore as creative chiddushim answer not just one, but many of the classic questions in a sugyah. It is no wonder that this Sefer has virtually sold out in its first printing.  The sefer has a wonderful mafteach in the back as well.

Aside from being a Gadol Hador in Torah, Rav Schustal’s midos are extraordinary.  Recently, the Ostreicher family in Woodmere was sitting shiva.  Rav Schustal drove two hours from Lakewood to the Five Towns (and back as well), to be menachem avel and express hakaras hatov.  Rav Schustal, however, did not know Mr. Ostreicher.  What was the hakaras hatov then?

Years ago, Mr. Ostreicher had given a loan to a young man who wished to purchase a nursing home.  He had started the young man off and eventually he became a gvir and one of Rav Schustal’s biggest financial supporters.  He was able to start his Yeshiva, ultimately because of the chessed of Mr. Ostreicher. Rav Schustal expressed his hakaras hatov by being menachem avel his family.