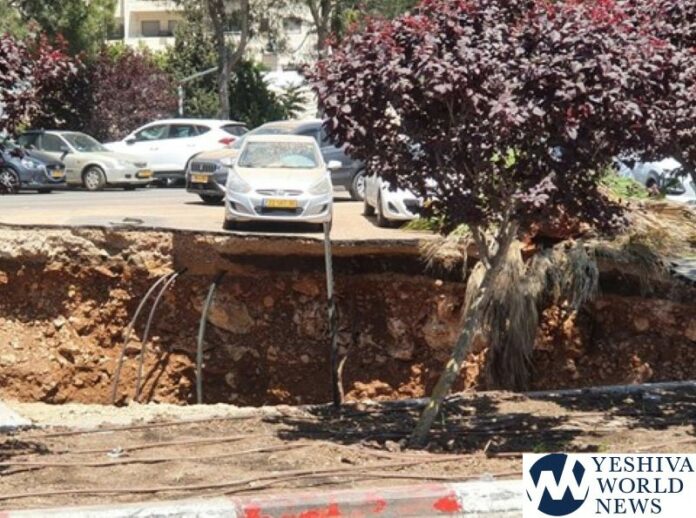 A huge sinkhole opened up in the parking lot of Shaare Tzedek Hospital in Jerusalem on Monday afternoon.

Videos of the incident show parked cars falling inside the huge crater that suddenly appeared in the pavement. The guard booth also partially collapsed inside the sinkhole.

Fire and Rescue Services, aided by the Jerusalem District’s Unit for Special Evacuations, arrived at the scene and searched for people that may have been injured or trapped or cars that fell in the sinkhole together with the passengers. Fortunately, the searches were completed and no one was found to have been trapped or injured.

Witnesses of the scene told B’Chadrei Chareidim that the incident could have ended with dozens of fatalities. “I saw it collapsing before my eyes,” one witness said. “Miraculously, only vehicles were damaged as they fell in the hole.”

MDA paramedic Aharon Miller told B’Chadrei that b’chasdei Shamayim, a terrible tragedy was avoided due to the timing of the incident. “If the sinkhole had opened shortly afterward, during the change in shifts at the hospital at 3 p.m., there would have been dozens of dead people. It’s mamash a neis, no less.”

It’s not yet known what caused the sinkhole but it’s believed that the mining of the Har Nof tunnel is what led to the collapse. This is the tunnel that was excavated as part of the construction of Highway 16 and the completion of the mining, which began in January 2021, is a key stage in the construction of the highway that will serve as the new main entrance to Jerusalem.