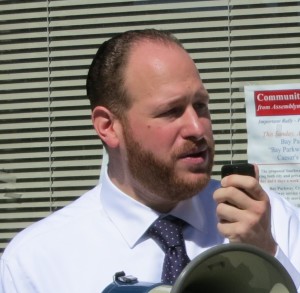 The Brooklyn Conservative Party announced its strong endorsement of Councilman David Greenfield and urged voters to support Greenfield’s re-election by voting on the Conservative line.

“David Greenfield is the only Conservative candidate in this race. The fact is that Greenfield always votes the right way on conservative issues whether it be lowering taxes fines and fees, protecting our religious rights or opposing gay marriage,” said Conservative Party Chairman Jerry Kassar. “That’s why we’re working hard to make sure he gets re-elected tomorrow.”

Councilman Greenfield has a long track record of fighting unfair fines and fees. He recently passed a package of legislation that reduces fines on small businesses and makes it easier for them to fight unfair tickets. Greenfield sponsored the legislation banning the Department of Sanitation from putting stickers on cars that accidentally park on the wrong side of the street. He also passed laws instituting a 5-minute grace period to prevent drivers from receiving parking tickets and passed laws shutting down muni-meters when they run out of receipt paper.

Today, Senator Simcha Felder, who was the Conservative Party’s candidate for Senate last year, circulated a letter to his consstituents asking them to re-elect Greenfield. Senator Felder said, “David Greenfield is the hardest working Council Member I know. He leaves no stone unturned in getting things done for our community, and he has an impeccable record of voting on all issues the way our community wants.”

“I need David Greenfield to continue his great service in the City Council on behalf of our entire community, and that’s why I’m asking you to re-elect David Greenfield this Tuesday,” concluded Senator Felder.