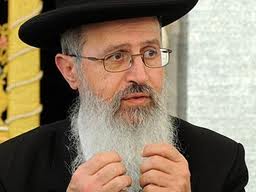 When Rav David Stav was running for the position of Ashkenazi Chief Rabbi of Israel, Maran, Maran HaGaon HaRav Ovadia Yosef ZT”L released scathing criticism against him, warning his election to that post would have a disastrous impact on Yiddishkheit in Israel.

On Monday, 1 Kislev 5774, during the first meeting of the Chief Rabbinate of Israel Council following elections, Holon Chief Rabbi and a son of Maran, Rabbi Avraham Yosef, called for disqualifying Rav Stav’s dayanus status to prohibit him from sitting on any beis din in the future.

Among the many issues raised during the meeting was renewing the dayanus status for rabbonim who today are not actively serving as dayanim. When the rabbonim reviewed the list, Rabbi Avraham Yosef objected to approving number 74 on the list, Chief Rabbi of Shoham Rabbi David Stav, Galei Tzahal (Army Radio) correspondent Yair Shreki reported on his Facebook page.