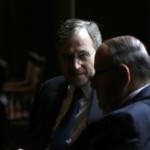 Astorino, who was elected to a second term last week, recently said he is seriously considering a run for governor.

“Clearly he’s thought about it in a very serious way, which is a very good indication that he’s going to be running,” Cox told radio host Fred Dicker on AM1300. “He is very seriously considering this. Very seriously. He’s taking the right approach,” Cox said.

Cox talked up Astorino as a Christie alike, comparing him to the reelected New Jersey Governor in part because of his personality, emphasis on fiscal issues in Democratic heavy Westchester and ability to win votes.

“The most important issues are the fiscal ones and the pro-growth ones. There is a taxpayer revolt going on. They are bleeding jobs. They want pro-growth policies,” Cox said.

“He would be a very serious and credible candidate,” Cox said.

GOP insiders say there’s talk that Cox, the son-in-law of the late President Richard Nixon, could enter the race himself, according to The Daily news.

“He’d put a reasonable face on the ticket if he can’t find a serious candidate,” said a top Republican consultant. “I think he could be a better gubernatorial candidate than a state party chair.”

Cox didn’t definitively rule out a run for governor when asked about the possibility.

“I’m looking for a good candidate, that’s what I’m doing–period,” he said. “I’m chairing the party and talking to several people who would be good candidates.”

But on the radio, Cox dismissed the idea.

“I’m the chairman of the party, I can’t consider it,” he said.

Meanwhile, Carl Paladino threatened to run for governor on the Conservative line if the Republican Party does not run a truly “Republican” candidate.

Running on the Conservative line and ending up with more votes than the Republicans, could end the Republican patronage jobs on boards of elections throughout the state and threaten to reduce the GOP to the third line (line C) on the ballot statewide.

Astorino, in Crazy Carl’s eyes is not an option.

“Astorino has purposely avoided the conservative side of the party and hangs around with all the RINOs (Republicans in name only),” Paladino said. “That southern Hudson Valley is all RINO country. He’s going to have to make significant choices if he’s going to be a candidate.”

Based on Tuesday night’s results in New York City, it is hard to see any Republican, conservative or moderate, win a statewide race against Governor Cuomo, who’s running for reelection after beating Paladino 2-1 in 2010.