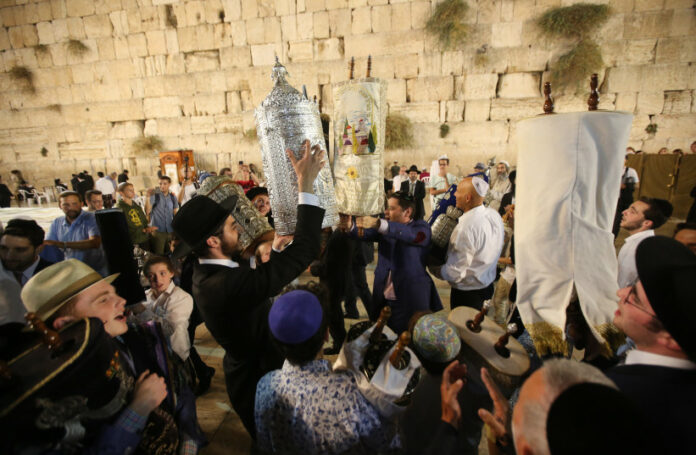 As people grow older, often the infirmities of age can change what used to be simple activities into situations with some challenges. Simchas Torah is, of course, a time of intense joy in which we celebrate both the completion and the continuity of the Torah.  In doing so, we generally remove all the Sifrei Torah from the Aron Kodesh and encircle the Bima with seven joyous Hakafos.  The Sifrei Torah are always on the move and in front of us, and this brings up some halachic questions.

The Shulchan Aruch (YD 282:2) states that one who sees a Sefer Torah being moved is obligated to stand up in front of it.  All should stand up until the person moving the Torah reaches his place or if it is no longer within their sight.

This Halacha would seem to dictate that the entire period of Hakafos of Simchas Torah, one must remain standing.  In many places the Hakafos can last several hours.  There are places in which the Hakafos last for four or five hours and rare is the Shul that has Hakafos for less than an hour and a half.Â Must one really stand the entire time?

Rabbi Yair Bacharach, author of the Chavas Yair writes in his newly discovered commentary on Shulchan Aruch (Mekor Chaim 141:7) that, in fact, there is such an obligation to stand.

The Aruch HaShulchan (YD 282:5) expresses a somewhat more lenient view.  He writes that while the Hakafos are going on and the Torahs are encircling the Bima, there is certainly an obligation to stand.  However, in between the Hakafos, even though the Torahs are being held by individuals, one may sit down.  His reason is that this is uquivalent to the Torah having reached its place. It is interesting to note that Rav Yoseph Teomim in his Pri Magadim (Mishbetzes HaZahav 141) writes that when a Chazan is holding the Torah while reciting Yizkor it is considered as if the Torah is resting in its place and there is no obligation to stand up.  So we do see some precedent for the Aruch HaShulchan’s opinion.

Rabbi Eliyahu Ben Yechiel Michel Zlotnick, a member of the Eida Chareidis Beis Din and once a Rav in one of the neighborhoods in Yerushalayim, in his Pri Eliyahu (Vol. III OC #24) presents an even more lenient position.  He writes that when the Torah is within a circle and around that Torah is another circle of people, the people form a living, human Mechitzah and it would be permitted to sit down beyond that circle.  We find the concept of a human Mechitzah in the Shulchan Aruch itself (OC 362:5) and this would apply here.

LIMITATIONS OF THIS VIEW

There are limitations to Rabbi Zlotnick’s leniency, however, if one of the people holding the Torah would move to the outskirts of the circle, which in this author’s experience happens relatively frequently, then the leniency would no longer be effective. Another possible limitation if found in the Pischei Teshuvah Yore Deah 282:2 mentioned by the author.  The Mechitzah itself also has height requirements.  It cannot merely be ten tefachim (handbreadths) above the ground, it should be ten handbreadths above the head of the individual.  It seems to this author, however, that not all authorities would agree with the Pischei Teshuvah’s requirement.  Rav Moshe Feinstein in his Igros Moshe does not subscribe to the Pischei Teshuvah’s stringency in regard to a synagogue Mechitzah and would probably not agree to that requirement in terms of a Mechitza delineating a separate area in regard to standing up for a Torah as well.

Regardless, however, the first point would require the participants to actually plan that no one hold a Torah on the outskirts of the Hakafos circle, something that would have to be planned and announced.

The Halichos Shlomo cites the view of Rav Shlomo Zalman Auerbach zt”l that one can be “melamed zchus” on those people who are lenient and sit.  He suggests that during Simchas Torah we might consider the entire Shul as a place of Seforim and it is as if they are resting in their place.Â Interestingly enough, he compares this rationale to a similar idea found in the responsa of Rabbi Betzalel Stern zt”l the author of the B’Tzel HaChochma (the Debriciner Rav’s older brother).

What is the idea found in the B’Tzel HaChochma?Â  He writes (Vol. V #139) that the entire obligation to stand is only derived in the Talmud (Kiddushin 33b) from a Kal VaChomer argument that since we are obliged to stand in front of those who study Torah, certainly we must stand before the Torah itself.  Rav Stern rationalizes that since there is no obligation to stand in front of those who are studying Torah when they are standing around, then there would be no rationale to obligate people to stand for a Sefer Torah itself.

Rav Moshe Shternbuch (Teshuvos VeHanhagos Vol. II #319) Shlita  also explains that when the Torah is not travelling to a particular place but is merely circling around the obligation to stand up is not so clear cut.  He writes that in such a situation it would be sufficient to stand just at the very onset of the Torah coming in front of him.

BUT AT THE END

What did the Gedolim do?  In 2010, my son spent Simchas Torah in Rav Elyashiv’s shul on Rechov Shmuel Salant in Meah Shearim. Rav Elyashiv zt”l was bedecked in the Yerushalmi Levush of a Shtreimel and his kapota, and walked around with a Sefer Torah for the first Hakafah.  However, for the rest of the Hakafos, he sat down while holding his small sefer Torah and began to delve in a Gemorah for the rest of the evening. He sat in his regular chair at the Mizrach vant.

Rav Elyashiv, advanced in age and suffering from ill health, did not avail himself of any of the above leniencies but took the leniency of holding a Sefer Torah and therefore sitting.